In its opening scene, Not Easily Broken, based on a novel by megachurch pastor T.D. Jakes, threatens to be a message film, with the overtly religious theme spoken by the minister at the wedding of Dave (Chestnut) and Clarice (Henson): God, says the clergyman, must be the third partner in a marriage. What this means as the movie plays out, however, places more emphasis on humanist decency than theology: Do good for your community; take care of each other; don't be too materialistic. Struggling contractor Dave and high-end real estate agent Clarice's marriage grows increasingly troubled, which is demonstrated by Clarice's growing unpleasantness – mostly yelling and unfairly blaming Dave in the face of his good deeds, such as mentoring the boys he coaches for baseball. At one point when Dave suggests having children, Clarice rolls her eyes, just as we do in the face of such a stereotype of the hard, career-driven woman. With thin plotting and events pulled from everyday fare, the film feels like an acquaintance taking a little too long to tell you about the problems in his life. A car wreck seems to exist solely to heighten the portrayal of women as capable of offhanded cruelty. As Clarice heads into surgery, her mother (Lewis) arrives at the hospital and confronts the blameless Dave with the mystifying accusation that his Little League duties caused the accident. Later, when physical therapist Julie (Quinlan) arrives, Clarice greets her with nasty retorts and more eye-rolling. When the film gets past these tiresome scenes, it loosens up into something pleasant. Sweet humor permeates the camaraderie between Dave and his buddies (Cibrian and Hart), and Clarice becomes human when gabbing with her friend Michelle (Nash). The mostly black cast rises above the script’s clunky passages, with fine work as a former drug dealer by Harris, who was terrific on HBO's The Wire. Mostly, Not Easily Broken is a pat portrayal of a marriage, neither overly dull nor especially engaging – except during Dave's sporadic voiceovers. Each made me sit up and go, "Huh?" In one paternalistic monologue, he mulls over how men's roles as strong caretakers have diminished. "Men forgot how to be heroic, or women didn't need to be protected anymore," he laments, perversely offering this rubbish while watching Clarice, her mother, and Julie successfully work together. It's fascinating how an innocuous film can suddenly flare up into offensive claptrap. 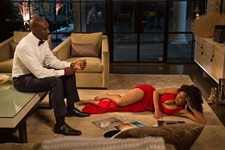 When the Bough Breaks
A surrogate mother goes psycho Anita O'Day: The Life of a Jazz Singer
This celebratory documentary skips briskly over the 60-plus-year career of one of jazz's pre-eminent and most original singers.