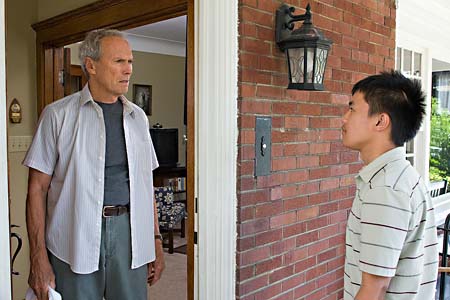 Nick Schenk’s Gran Torino screenplay wasn’t written with Eastwood in mind as the film’s star and director, but you’d never guess that was the case, so comfortably does the film fit the lauded filmmaker and icon’s public persona and body of work. Eastwood’s performance as Walt Kowalski perfectly caps a career spent playing gunslingers and outsiders, characters who dance on the thin line that separates the lawful from the lawless, characters motivated by moral compasses that are embedded within rather than applied from without. Should the 78-year-old Eastwood chose this role to be his last onscreen performance, it would be a fitting decision as the character of Kowalski seems such a mature condensation of everything that has come before. As we are introduced to him, we learn Kowalski is a retired auto worker and newly minted widower. He lives in suburban Detroit where the American flag flies in front of his Craftsman-style home, and a cherry ’72 Gran Torino (whose steering column he personally installed while on the assembly line) resides in the garage out back. Over the years, he’s seen his neighborhood change to the point that he is one of the last white residents remaining in an area now inhabited largely by Hmong immigrants from Vietnam, Laos, and Cambodia. The young Hmong men regularly fall into gangs that compete for neighborhood turf with black, Mexican, and other ethnic gangs. Bigoted epithets emerge freely from Kowalski’s lips, but as the film proceeds we sense his offensive language is more a result of culture and upbringing – it’s the way men of his day were taught to navigate the world. Kowalski, no doubt, has been the butt of many a Polish joke, and besides, what’s a man to think when he genuinely worries that his Asian neighbors might steal and cook up his dog, Daisy, for dinner? Kowalski’s ignorance gradually melts as the troubles of the matriarchal Lor family next door spills over onto his property. He embarks on a tentative mentorship of teenage Thao (Vang), who lacks the skills to get a decent job and the strength to resist the lure of the gangs. In the process, Kowalski also gets sucked into the gang warfare and becomes the Lor family’s protector and finds the means of his own redemption (rectifying, among other things, wrongs that have haunted him since his time fighting in Korea). As director, Eastwood's usual economical yet efficacious style marks the film, but it is his performance that is really the heart of this show. Still lithe and taut in his movement, Eastwood nevertheless allows his aging body to sag in places and shows how Kowalski’s body doesn’t always respond fully to his bidding. His sinewy and seasoned performance stands in contrast to the immediacy conveyed by the nonprofessional cast of Hmong actors. Eastwood finds the humorous aspects of the character as well, no more so than when the appetite of the widower who lives on beef jerky and Pabst Blue Ribbon becomes the center of attention among the Hmong women cooks. There's also Kowalski's instinctive growl that he directs toward all annoyances, be they his own money-grubbing family members, gangbangers, or the neighborhood priest. Eastwood plans to go on making more movies, but it's doubtful any will be as satisfying a career culmination as Gran Torino.