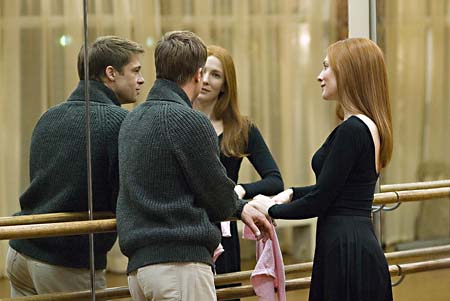 The Curious Case of Benjamin Button

It's quite a feat, really, to have stretched F. Scott Fitzgerald's slender, unsentimental curio into a three-hour-long – very long – major motion picture about Benjamin (Pitt), who is born with the arthritic creak of an old man and proceeds to age in reverse. Everything that was sharp in the original text has been rounded and buffed; Benjamin is no longer a "case," he's a cause, and Fitzgerald's cynical eye toward humans' fleeting attractions, and attractiveness, has been junked for a love story – you know the kind – that spans decades of rising hemlines and missed opportunities. Screenwriter Eric Roth transposes the action from antebellum Baltimore to Armistice Day in New Orleans (which accommodates an ineffective framing story involving Hurricane Katrina). When his wife dies in childbirth, a devastated Thomas Button (Flemyng) scoops up his eyesore of a son (who has the look and sound of a newly hatched pterodactyl) and abandons him on the front porch of a boarding house for aging persons. The home's caretaker, Queenie (Henson), raises Benjamin as her own, and he finds a community there, surrounded by the similarly infirm, until – well, until he doesn't. The problem with this kind of episodic (un)coming-of-age tale – as with Roth's previous Oscar bait, Forrest Gump – is that too often, transitions, major life decisions, feel unmotivated. Set-pieces exist discretely – there Benjamin is, crewing on a tugboat; there he is, romancing a spy's wife – with only a thin connective tissue involving childhood sweetheart Daisy (Blanchett). Technically, Benjamin and Daisy are about the same age but don't look it; when they meet up in the middle – when they look and feel the same age – Fincher films them with an almost embarrassing religiosity. (Far more interesting are the early scenes, in which Pitt works in concert with the CG to convincingly portray a little boy locked inside an old man's body.) We've come to expect much darker, broodier stuff from Fincher (as in last year's brilliant and underrated Zodiac), and this newfound romanticism and injections of Jeunet-like sight whimsies prove an uneasy fit. He's a master craftsman, to be sure, but when he directs those talents toward, for instance, an idyllic montage set to "Twist and Shout" that plays like a highly effective cologne commercial, one can't help but feel snookered. Fincher's selling us beautifully cheekboned movie stars frolicking in bedsheets and calling it a great love. I didn't buy it for a second.