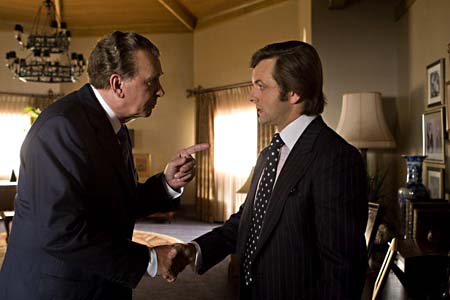 Just when it seems the American people can’t get through a single day without a new political scandal or revelation about some brazen abuse of the public trust, there comes along a familiar old bogeyman: Richard M. Nixon. Director Howard, it seems, has gifted us this Christmas with the legend of Dick Nixon to kick around some more. Frost/Nixon is a behind-the-scenes account of the momentous interviews with Nixon conducted by British TV personality David Frost in 1977, three years after the former president had resigned from office in disgrace. The film is adapted for the screen by Peter Morgan (The Queen, The Last King of Scotland) from his play and stars the play’s two leads: Langella (who also won a Tony for this role) as Nixon and Sheen as Frost. Almost by definition, Frost/Nixon is a two-handed work, a psychological boxing match between the two protagonists, and Langella and Sheen, the actors, are evenly matched. Each man also counts a few coaches and assistants in his corner, making the taped interviews seem all the more like a prizefight. The purse? Frost seeks to shed his reputation as a lightweight journalist and gadabout and earn the attention of an even greater share of the worldwide English-speaking television audience. Nixon, ever parsimonious, is lured by the unprecedented interview fee of $600,000 and the opportunity for so much television access to the American people. In Frost’s corner are researchers James Reston Jr. (Rockwell) and Bob Zelnick (Platt), who are angling for the interviews to result in the Nixon apology that Gerald Ford’s pardon of the president forever obviated. Viewing their anguish as they witness Frost’s lackadaisical preparation and outright defeat during the first few interview sessions is almost like watching a comical Mutt & Jeff routine. Nixon has Jack Brennan (Bacon), a spit-shined and devoted military man who is his aide and protective right-hand man, and Swifty Lazar (Toby Jones), the Hollywood agent who brokered the deal on Nixon’s behalf. It’s this stuff that provides the juice for Frost/Nixon: the unseen effort that goes into every hour of television programming. As a director, Howard is frequently drawn to such nitty-gritty. (The Paper provides one of the best newsroom portraits ever filmed; Apollo 13 shows as much, if not more, of what happens at mission control as in outer space; Backdraft, at times, has more information about the practice of firefighting than it does the movie’s characters.) Frost/Nixon is at its best when it is examining this 1977 example of the fragile intersection of media and politics. On its own, I’m not sure that this story of Frost’s chutzpah and Nixon’s intractability is inherently that gripping, which must be why Morgan inserted a purely fictional exchange (a drunken midnight call from Nixon to Frost) into the movie’s climax. Howard, no doubt, is striving for contemporary resonances about today’s media/political inbreeding, but I think that after this past presidential campaign, the lessons have progressed to an even more esoteric plane. Ultimately, Frost/Nixon may be stuck in time – but, oh, what a time it was.