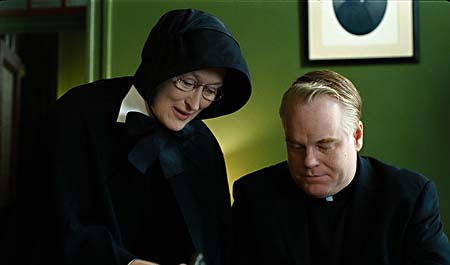 Playwright Shanley adapted his Pulitzer- and Tony Award-winning play, Doubt, for the movies and also decided to direct the film – an activity he hasn’t pursued since his one other directorial effort in 1990, the ill-received Joe Versus the Volcano. The cast he gathered for Doubt is peerless, and if nothing else, this assemblage is always a pleasure to watch. Unfortunately, the actors don’t all behave as though they’re performing in the same movie. A collection of acting styles, from the broad to the contained and the exacting to the unrestrained, creates an unevenness of tone and interpretation. Although Shanley wrote the play just a few years ago at the height of the pedophile priest scandal, the film is set in 1964, the time of Shanley’s own boyhood. As much as it appears Shanley has a bone to pick with the Catholic priesthood, it seems he also has a score or two to settle with some of the dogmatic nuns of his past. Streep plays Sister Aloysius, the unwavering principal of the St. Nicholas school, run by an order that still wears the intimidating black garb and bonnets of the old-school nuns. Into her dominion comes the new young priest, Father Flynn (Hoffman), who embodies everything the church reformers of the Sixties tried to bring about. In between them is the patsy, Sister James (Adams), a young, forward-thinking nun who is nevertheless uncertain of what she knows. She observes something troubling and reports it to Sister Aloysius: She suspects there might be a special relationship between Father Flynn and Donald Miller (Foster), the school’s first black student. (The word “pedophilia” or anything of the like is never uttered in the movie, yet everyone knows what is being discussed.) Thus begins a true power struggle between Sister Aloysius and Father Flynn, one that carries with it all the baggage of Catholic tradition and hierarchy, as well as the period’s secular strife between men and women. There are many small, telling moments in Doubt as the viewer is yanked back and forth while the film racks up arguments for each side. Neither side presents definitive evidence, though Sister Aloysius never permits doubt to cross her stern countenance. It’s a cerebral tug-of-war for the viewer, a struggle that’s made only more opaque with the film’s closing line of dialogue. Meanwhile, storms suddenly stir up outside, and lightbulbs repeatedly burst in Shanley’s effort to cinematically underline the pent-up emotions within. There is only one thing of which I am certain, something preached by Father Flynn at the outset of the film: Doubt is a bond as sustaining as certainty. Joe Versus the Volcano
...