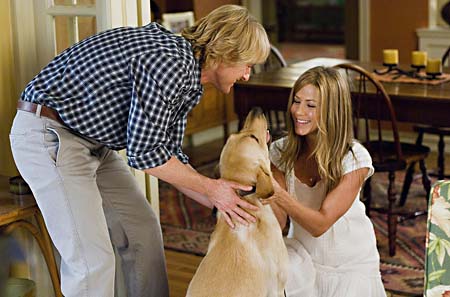 There are, if you're in a reductionist state of mind, only two types of people in the world: dog people and cat people. Dog people – I count myself among their ranks – will enjoy Frankel's adaptation of journalist John Grogan's bestselling account of life, love, deadlines, and death with the "world's worst dog," a yellow Labrador retriever named Marley. Marley is played, very realistically, by several actual Labs, among them Clyde and Brody, who, although I can't tell them apart, frankly, have clearly mastered the craft of animal acting. Is there an Actors Studio for canines somewhere? Because they're turning out some amazing drooly thesps these days. Never mind the frisky CGI superheroics of Bolt or the teary mawkishness of Old Yeller – Marley is into extinction-level household devastation, scandalous fecal shenanigans, and the terrorization of Turner, all of which sound like great fun and indeed are. James Lipton (who voiced the director in Bolt, by the way) needs to drop whatever he's up to at the moment and get these rambunctious maniacs Inside the Actors Studio posthaste. Maybe they'll chew up those annoying blue notecards and then get to work on that maddening goatee-beard hybrid. Somebody ought to. But I digress. Wilson, seemingly fully recovered from whatever personal demons were tormenting him last year, plays Grogan with his usual battered charm, and Aniston, as his wife, Jennifer, is, well, Jennifer Aniston. Ostensibly a story about a mad, bad, dangerous-to-walk dog, Marley & Me has far more to say about the bonds that make up the modern American family. John churns out columns for a Florida daily but always aimed for a high-profile journalism career like that of his globetrotting buddy, Sebastian (Dane), who lands at The New York Times. Restless, the couple moves to Philly in search of more satisfying reportage for John, but, shucks, the guy's a born columnist: He's no muckraker, although he's pretty dang handy with a pooper-scooper. Marley & Me is less about dreams deferred than new, unexpected dreams emerging. And Marley, the dog from hell, (wouldn't you know it) turns out to be nothing shy of a gift from heaven. Sweet and wise and often laugh-out-loud funny (just like Grogan's book), Marley & Me isn't just for dog people; it's just not for Cruella De Vil. 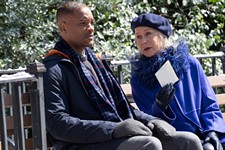