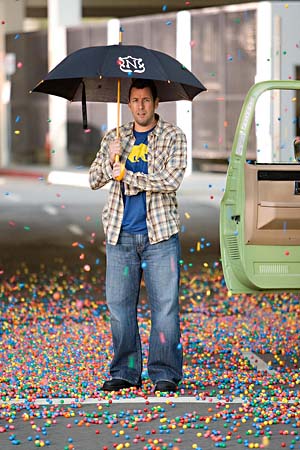 After years of wandering in the wilderness of artistic obscurity – like Vincent van Gogh – misunderstood comic genius Adam Sandler has finally found his audience: 3-year-olds. It makes perfect sense, really. From setting bags of dog feces on fire in Billy Madison to urinating on buildings in Big Daddy to ogling bouncing breasts in Click, Sandler has always prided himself on being the poster boy for American male regression, so it was only a matter of time before he gave up the pretense of being an adult and just started making kids movies. In his latest, Bedtime Stories, co-written by Matt Lopez and the Man Behind the Man-Child Tim Herlihy (Happy Gilmore, The Waterboy, etc.), Sandler plays Skeeter Bronson, a goofy hotel handyman with a passion for the simpler things in life – gum balls, sports cars, laughing at little people – who is suddenly thrust into the world of adult responsibility when he learns that his haughty archenemy, Kendall (Pearce, for reasons passing understanding), is being groomed to take over the hotel instead of him and that his sister (Cox) needs him to look after her two young children while she’s away. This kind of dabbling in adulthood is a consistent theme in the Sandler/Herlihy catalog, both men apparently convinced that a doofus trying to be responsible is the funniest thing in the world. But unlike in their previous films in which Sandler’s infantile irrepressibility played like an act of rebellion against the square world, in Bedtime Stories, the actor’s childishness, when in such close contact with the childishness of real children, comes off merely weird, if not borderline mentally challenged. By the time Skeeter starts making up stories for his niece and nephew – stories that are depicted in elaborate CGI fantasias featuring medieval knights and gunslinging cowboys and then start coming true in real life and become the blueprint for Skeeter’s inevitable and heroic triumph – I was so exhausted by Sandler’s rubbery-face-and-funny-voices schtick, not to mention his Jerry Springer-ready battles of the sexes with love interest Russell, that no amount of good-natured moralizing about the importance of family and love was going to have any effect on me. But the minds behind Bedtime Stories don’t care if you go along with their story, because their story couldn’t matter less. They’ve packed their movie with so much random special-effects adorability – dancing bug-eyed guinea pigs, drop-kicked elves – that all one can do is surrender to the onslaught and hope that one day America will stand up and demand that Sandler stop making movies already and just rent himself out for kids’ parties.