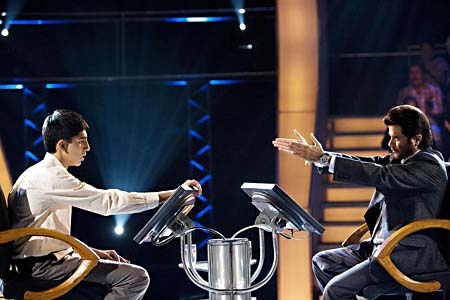 To my knowledge, nobody has ever accused Brit director Boyle (Trainspotting, 28 Days Later) of having a deficit in the style department. Only rarely has he seemed to favor that trademark style over some substantive story and characterization – the less said about A Life Less Ordinary, the better. Even The Beach had something wise to say about the brittle nature of society and personal idealism and what happens when the two begin to clash. Slumdog Millionaire, which seems to pick up a new raft of critics' awards just about every day (it snagged the Out of Competition Feature Audience Award at the Austin Film Festival), is a mad, thrilling, and perversely luminous film. It may be drenched in the saffron and violet palettes of its Mumbai setting, but it plays like a classic Hollywood rags-to-riches love story, albeit one with Bollywood roots and a fully globalized desire to survive, succeed, live, and love within the teeming megalopolis formerly known as Bombay. It's a natural fit for Boyle and director of photography Anthony Dod Mantle. Mumbai is nothing if not giddy chaos incarnate. Patel, in his feature debut, is the "slumdog" of the title, a reed-thin young striver named Jamal Malik. Jamal has managed to survive the crushing poverty and daily tragedies of his birthplace and has somehow landed himself on the Hindi version of Who Wants to Be a Millionaire?. Everyone in Mumbai wants to know how this lower-caste lad wangled his way into the million-rupee hot seat. Boyle and locations co-director Tandan, working from Simon Beaufoy's unflaggingly sensual script, smartly use Jamal's millionaire queries as both a framing device and a springboard to all that has led up to his "final answer." It's a doozy of a story that piles on the traditional Holly- and Bollywood melodrama but never shies away or strays too far from the Ganges and the ghetto. Still, for all its mind-boggling imagery and a magical score by A.R. Rahman (with additional soundtracking courtesy of M.I.A.), Slumdog has as its beating heart a trio of actors – Patel, the willowy Pinto (playing Jamal's lost love Latika), and the electric Mittal as Jamal's wayward brother, Salim – who go beyond their characters to bring to life the sprawling, strangely Dickensian city of Mumbai itself. It's all hopelessly lovestruck, awestruck, and full of epic-sized emotions and splendor, but Slumdog Millionaire is also very much a film of the moment. There's blood running in the Mumbai gutters, to be sure, but Boyle and his spot-on cast never let us forget that that same crimson ebb also flows straight to the heart. Like Mumbai, Slumdog pulses and throbs with raw, unadulterated life and the hope for a better Bombay, today. It's brilliant.

The Final Answer
Slumdog’s soundtrack is no slouch itself