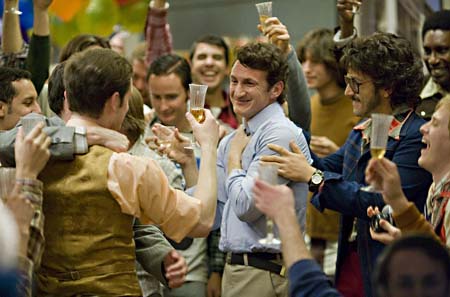 “My name is Harvey Milk, and I want to recruit you.” Milk liked to open stump speeches and rallies with that call to action, and it perfectly captured both his large-heartedness and single-mindedness about the fight that defined the last decade of his life – advancing gay rights in San Francisco, the state of California, and the whole of America. Gus Van Sant’s very fine biopic restricts itself to that last decade, when Milk, a semicloseted insurance man living in New York, moved to San Francisco’s Castro district and embarked upon a historic campaign (four, in fact) to become the first openly gay man elected to public office. The tragic coda, of course, is that Milk was assassinated in 1978 (not long after taking office), alongside the city’s mayor, by fellow City Supervisor Dan White. The film’s merits aside – of which there are many – it’s worth nothing that Milk is the second biopic released this fall to suffer from a case of curious timing. In the instance of Oliver’s Stone’s rush job, W. – made too soon to have anything truly substantive to say about Bush – it raised the question: Why now? And with Milk, one wonders – with something of a moan for the missed opportunity – why not two months ago? Besides the fact that Van Sant and Penn’s endearing, indelible portrayal of Milk might personalize a gay man for Middle America in much the same way Brokeback Mountain did three years ago, there is also the obvious correlation between the recent Proposition 8 vote in California and a similar struggle, as told in Milk, over California’s Proposition 6 initiative, which sought to remove gay and lesbian teachers from public schools. Both are instances of civil rights being stripped from a large swath of a state’s population, and the Prop. 6 portion of Milk leaves a bitter aftertaste – for the sad fact of how far we still have to go and for the blown chance of a film to act as agent of change during a crucial election. Certainly Milk will have a place in the post-Prop. 8 groundswell of public awakening to the cause, and it’ll have a place in the Oscar race, too. Technically, Milk is a knockout: It was shot by Harris Savides on 35mm, but the stock has the era-appropriate feel of grainy 16mm, and the set and costume design – browns and ochers, high waists and wide ties – feel authentically lived-in, without a whiff of kitsch or prop department wankery. Top to bottom, the thing is terrifically acted, from Penn’s titanic, open-faced performance to staggering turns from two young, chameleonic actors – Hirsch, as the bushy-haired Cleve Jones, who matures under Milk's tutelage from kid trick to sharp-shooting activist, and Franco, as Milk’s put-upon lover, Scott. The early scenes establishing Milk and Scott’s relationship will catch your breath, with their intimate lens into the everyday ways every couple must negotiate its domesticity, as in a teasing chase around their apartment that ends with Milk leapfrogging onto the bed, crying out, “Sanctuary!” Still, when the focus of the script (by first-timer Dustin Lance Black) turns almost exclusively to the Prop. 6 fight and Milk’s last days, the film loses much of its loose-limbedness – a mirror, perhaps, of Milk’s own tamping-down as politics swallowed his personal life whole, but a disappointment nonetheless. Milk is a more conventionally satisfying picture than Van Sant’s previous Aughties output – Gerry, Elephant, and Last Days – which were almost aggressively experimental films that didn’t always work but got under the skin something fierce. The deeply heartfelt Milk is more of a surface skim: a fairly standard biopic – if a very fine one, indeed – but never the transcendent work one would have hoped from the filmmaker or his subject. (See "History Circles Its Tail," Dec. 5, for an interview with the director.)