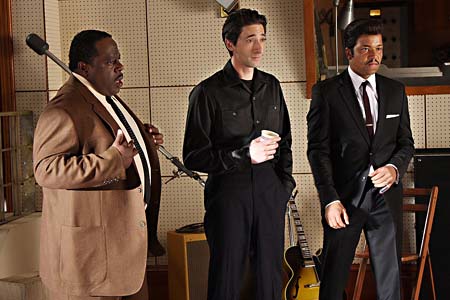 As the song goes, “The blues had a baby, and they named it rock & roll.” But long before that famous birth came the courtship, conception, and gestation – processes that worked on timetables unconnected to human biology. Cadillac Records is a music portrait that looks at one of those primary musical wombs – postwar Chicago and the musicians who gravitated there, such as Muddy Waters, Howlin’ Wolf, Little Walter, Chuck Berry, and Etta James, and the Chess Records label, which recorded and promoted so much of their work. Although writer/director Martin’s movie plays loose with many of the historical facts, her aim is dead-on in terms of nailing the spirit of the thing. Cadillac Records bobs and weaves, strides and duckwalks, samples and smiles on the sounds that made urban Chicago such a blues melting pot. It's best to not get too hung up on the purity of every single ingredient that goes into the pot, because that will only get in the way of the dish's overall taste, and Cadillac Records has flavor galore. The film celebrates the music and the talent but provides only shorthand glimpses of the biographies and career highlights of the figures involved. At the center is Leonard Chess (Brody), a white club owner who trades in his club (under mysterious circumstances) for a recording studio on Chicago's South Side. There, with his brother (who is nowhere to be found in this movie), he recorded the musicians listed above, plus many, many more, throughout the Fifties and Sixties. The actors cast as the bluesmen and -women are spectacular – again, not so much for their physical mimicry but for their spiritual inhabitation of the historical figures. Wright looks little like Muddy Waters, but his performance captures a sense of the "mannish boy"; when he plugs his guitar into an electric amp while busking on the Chicago streets, the movie in a flash reveals the originality of his sound: Delta grooves magnified by the power of electricity. Little Walter's (Short) story is colored by his alcoholism and brawling, but the revolutionary sound of his harmonica playing is captured here, too. As Howlin' Wolf, Walker gives one of the standout performances of the year; Mos Def delivers a believable Chuck Berry impersonation; and Beyoncé as Etta James is a complete revelation. The film is held together by a somewhat scattershot narration by Willie Dixon (Cedric the Entertainer), who wrote so many of the songs produced by the Chess label. Some viewers are bound to quibble with details, but to my mind they're missing the forest for the trees. Martin's film captures a true sense of such nebulous things as the rivalry between Waters and Wolf, the complexity of the business relationships between Chess and his artists, and Chess' love for James, which almost undid his marriage. It may not be precisely true that Berry's duckwalk brought racial integration to the music, but as Martin films it, she gives concepts such as this resonance. Muddy sang that he "can't be satisfied"; I think this movie might have changed his tune.