Frank Castle is the Punisher, Marvel Comics' one-man vengeance machine, who appears here in his third screen iteration and is played by Stevenson (HBO's Rome), the third film actor to personify the comic-book hero. The character was last seen in 2004, played by Thomas Jane in a fairly campy version of Castle's origin story. An ex-Marine, Castle becomes a homicidal maniac after mobsters murder his wife and daughter, and he slaughters the mobsters in return. Frank Castle was also played by Dolph Lundgren in a 1989 direct-to-video release, which is often overlooked by commentators. Despite being human, Castle is virtually indestructible: Sure, he can dish out the violence, but he can also withstand anything that comes at him – without even mussing a single strand of his perfectly slicked-back hair. The blood and gore quotients of Punisher: War Zone are extremely high and are sure to sop the appetites of the series' fans and virtual bloodlusters – perhaps a trade-off for the muting of this most recent Punisher's signature garb and biting comebacks. Director Alexander handles the action with relentless fervor and occasional wit. (Alexander, a former karate champion, won acclaim for her 2005 soccer movie, Hooligans, which premiered at South by Southwest, where it received Jury and Audience awards for Best Narrative Feature.) An image of the Punisher shooting double-fisted while twirling upside down from a chandelier at a mob dinner party is priceless, as is the impaling of a bad guy's noggin on an iron fence, which is then used as a stepping-stone to cross the tall metal barrier. Frank Castle is a cartoon version of Death Wish's Paul Kersey (played by Charles Bronson), a remorseless vigilante whose only raison d'être is vengeance, even once the character's own personal beefs are settled. War Zone has him battling it out with the series' recurring character, Jigsaw (a bold move on distributor Lionsgate's part, since its cash-cow franchise Saw also features a baddie by that moniker). West brings a lot of verve to Jigsaw, whose face was horribly sliced and diced by a glass-recycling machine, but perhaps not as much as his mayhem-mad brother, Loony Bin Jim (Hutchison). The film is shot in striking neon pastels and filtered light, which is maybe meant to indicate some of the human conflict Stevenson's Punisher experiences when he mistakenly kills an undercover fed who's been embedded with the mob. Castle is dismayed by his error, and that guilt drives this film's plot. But I won't dwell on that here. Like the Punisher says to one of his victims: "Let me put you out of my misery." 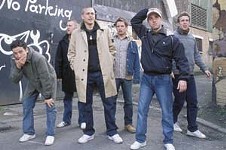