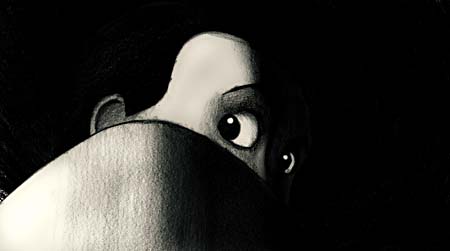 Fear(s) of the Dark

This French anthology of six short animated films, which are thematically linked by their dark tonalities and stirrings of dread, will have greater appeal for animation buffs than horror hounds. Taken together, they tap into our deep-seated, primal fears: invasive insects, haunted houses, fierce dogs, mysterious disappearances, the amorphous existential nightmare. These stories won't make you flinch or recoil with fright but instead allow you to appreciate such things as humanity's universal repulsion of skin-crawling insects. Our hopes and dreams may vary, but our fears, it seems, are virtually prehistoric. The work of six of the world's finest graphic artists and their writing partners is on display here, and while Fear(s) of the Dark doesn't escape the uneven, hit-and-miss results that plague most anthology projects, the collective film is an effective mood piece. The untitled segments are bound together by Blutch's recurring piece featuring a nobleman from a previous century walking four fang-bearing hounds chafing at their leashes. One by one, each dog breaks free to devour the perceived human menace in its path. These pencil drawings, which look almost like scribbles, convey a sense of uncaged fury and madness that might be almost humorous were it not for the nasty undercurrent about the upper classes unleashing the hounds of hell on society's weaker subjects. Another segment by Di Sciullo, which also reappears throughout the film, features geometric shapes metastasizing in space while a disembodied voice (Garcia) prattles on with an endless litany of modern fears ("I'm afraid of being incredibly bourgeois"; "I'm scared of never being useful"). There are two standout shorts in this series. The first is by Burns and is a high-contrast, black-and-white-rendered story of a geeky male student (voiced by Depardieu) whose girlfriend metamorphoses, Kafka-style, into a predatory insect. It recalls the pages of EC Comics and old issues of the Insect Fear comics series. (Insect fear is a recurring motif in numerous segments.) The most sublime segment is the film's final episode by McGuire, in which the artist turns a standard-issue haunted-house story into a thing of graphic beauty. By concluding with McGuire's piece, Fear(s) of the Dark affirms its mission as an exploratory artistic venture for graphic storytellers turned animators.