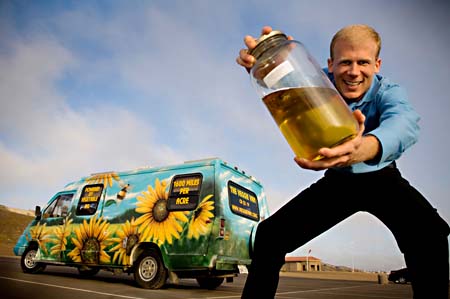 Okay, before we go any further, let’s get something straight: Fuel is not a movie. It may look and sound and feel like a movie. It may call itself a movie and get written about by people who write about movies. It may even win awards given to movies (notably, the Audience Award for a documentary at the Sundance Film Festival, where it played under a different title and shorter running time). But it’s not a movie. It’s a two-hour infomercial for biodiesel that somehow managed to escape from whatever environmental convention at which it was supposed to quietly screen and is now making its way to local theatres, perhaps to play as one-half of a double feature with Your Friend the Carbon Offset. Fuel’s message is clear – oil is bad; alternative energy is good – and its goals are simple – put Big Oil out of business by selling the American public on the virtues of cleaner energy sources, such as wind, solar, ethanol, hemp, and world music. It’s a noble aim, and God knows there’s enough evidence of the devastating economic, environmental, health, and political effects of an oil-based economy to scare the daylights out of anyone who’s paying attention. But movies aren’t meant to be advertisements, and any documentary out to push a particular ideology – no matter how much you or I may agree with it – is propaganda, pure and simple, and should be saved for monthly meetings. To his credit, director Tickell makes no attempt to hide his evangelistic intentions. He’s an alternative-energy zealot who once drove cross-country in a car powered only by fast-food cooking oil and then wrote a bestselling book about it called From the Fryer to the Fuel Tank: The Complete Guide to Using Vegetable Oil as an Alternative Fuel. So from the first scene of his film, we know he’s happily in the tank for alternative fuels, singing the praises of Mother Nature and American populism and wondering out loud things like, “Is our government for sale?” (That he has to ask such a question is probably indication enough of what kind of big-hearted but perhaps softheaded hero Tickell is.) Taking his cues from Michael Moore and Morgan Spurlock (Super Size Me) but lacking their verve and moviemaking instincts, Tickell has put together a good-intentioned but dull mishmash that’s part autobiography, part first-person travelogue, part history and ecology lesson, and part shamelessly inspirational call to action. Using charts and animated graphics and historical footage, he ties our national obsession with oil to melting glaciers, melting economies, the Iraq war, Hurricane Katrina, and the collapse of the American way of life, getting backup along the way from a whole parade of scientists, experts, activists, politicians, and environmentally conscious celebrities like Woody Harrelson (hemp activist), Willie Nelson (the king of biodiesel), and Larry David (the king of the Toyota Prius). And he’s right, and he’s good, and he’s virtuous to do so, and he should be applauded for his efforts; saving the world, I’m told, is a noble venture. But that doesn’t mean his pet project has any business being anywhere near an actual movie theatre.