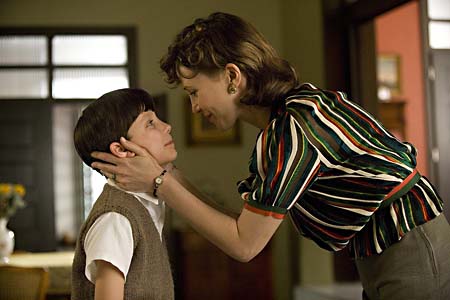 The Boy in the Striped Pajamas

If you’re a Nazi and you’re contemplating becoming a concentration-camp administrator, there are two movies I can think of to watch as cautionary tales. The first is The Great Escape, which will teach you not to assemble the most notorious group of jail-breakers the enemy has to offer behind the same stretch of barbed wire and then leave them to their scheming. The lesson to be learned from the second movie, The Boy in the Striped Pajamas, may not be as obvious, but it should probably be heeded with the same vigilance: Don’t move your family into a house next door to a concentration camp and then hope they won’t figure out what’s going on because, inevitably, your 8-year-old son will make friends with one of the Jewish boys imprisoned there and gradually come to realize what a monstrous bastard you are, your wife will begin to go insane after realizing just how much of a monstrous bastard you are, and your teenage daughter will start seeing the sadistic fun to be had in becoming a monstrous bastard like you. In other words, things can get very messy. In writer/director Herman’s capable adaptation of John Boyne’s bestselling novel, the tropes of the heartwarming indie kids movie get thrown together with the tropes of the low-voltage, war-at-home war drama, and the result is muddled but undeniably affecting. On the one hand, the film is a welcome challenge to our ingrained cinematic sensibilities which tell us to loathe Nazis without exception. Farmiga plays the wife of a German officer (Thewlis) who didn’t realize until her husband’s promotion to the rank of concentration-camp commandant that the anti-Semitism and hatred that had been poisoning her country had started to metastasize into institutional mass murder. Watching her wake slowly to the most awful epiphany one could ever wake to is the greatest joy the film has to offer, and Farmiga’s performance is a triumph of contradiction, fear, and incomprehension. On the other hand, the interactions between the couple’s son, Bruno (Butterfield), and the emaciated boy dying in the camp next door are guilty of the cardinal cinematic sins of forced adorability and emotional manipulation. Cardinal and predictable. Because what kind of person wouldn’t be moved by children from opposite sides of a war struggling to overcome towering inhumanity and age-old bigotry in the name of friendship? And what kind of filmmaker wouldn’t therefore be tempted to squeeze that emotional vulnerability for all it is worth? The Boy in the Striped Pajamas is safe filmmaking all the way, hinting at enough incomprehensible brutality to get hearts aching but unwilling to force audiences to actually stare that brutality in the face, lest sympathy give way to horror. True artists will risk sacrificing audience goodwill for truth and sentimentality for cold historical reality, but Herman doesn’t want your respect; he just wants your tears. 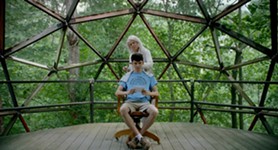 The House of Tomorrow
Punk coming-of-age tale is a little too sweet for its own good.