Jean-Claude Van Damme is the JCVD of the title, and in this career-adjusting film, the Muscles From Brussels advances from laughingstock to smart, respectable action-film star. JCVD is a postmodern action movie in which Van Damme, here cast as himself, becomes innocently entangled in a bank robbery/hostage crisis, and in a Kafkaesque twist, the police, SWAT team, and throngs of Belgian spectators who spontaneously gather all believe Van Damme to be the perpetrator of the heist. With a career that has dissipated from its Eighties heights and worldwide acclaim to the last decade's ignominy of direct-to-DVD schlock, Van Damme's current reputation is such that those assembled at the crime scene think that their favorite native son turned international joke has returned to Brussels to immolate in spectacular fashion what's left of his career. Director and co-screenwriter El Mechri uses nonlinear strategies to tell the backstory of how Van Damme has arrived at this particular moment in time, starting with a stunning, several-minute-long shot of nonstop action as we witness Van Damme, the actor, fight his way down a sniper-ridden, booby-trapped street while filming a scene for his latest movie. The way in which El Mechri reveals the artifice to the audience is delightfully "meta" and sets the tone for the rest of the movie. Van Damme, the character, has returned to Brussels for a family visit on the heels of the demoralizing movie project previously seen and a failed custody hearing for his daughter in which his entire film catalog is used against him as proof of his unsuitability as a parent. Even his daughter, when asked by the judge to name the parent she'd prefer to live with, cites her mother since the kids at school laugh at her whenever any of her father's movies plays on TV. A check to his lawyer has just bounced, and Van Damme furthermore learns that he's just lost a movie project to Steven Seagal, who has promised to cut off his ponytail for the role. The whole situation is a dark reflection of Van Damme's real life in which his five marriages, a custody dispute, and legendary drug, violence, and money problems have been the stuff of international headlines. JCVD shows us Van Damme as a defeated, sympathetic man, a hulk of aging flesh and blood (and muscles). El Mechri shoots JCVD in deliberately dingy tones that make the film look more like one of the realist offerings of his fellow countrymen, the Dardenne brothers. One sequence, however, disrupts the wonderful flow of JCVD, and it's a passage disputed as either the film's pièce de résistance or primary foible. I'm in the latter camp on this six-minute-long, single-take soliloquy during which Van Damme floats above the action and speaks directly and truthfully to the camera about his career. Despite its forthrightness, the scene doesn't add any commentary that hasn't already come across through the role itself. It just spells everything out in a more self-indulgent manner. However, post-JCVD, we'll never again be able to think of Van Damme as just another kickboxer turned actor. Van Damme is an actor, pure and simple, and proves that he is just as deft and accomplished as the movies in which he appears. (See "Inside the Mind of the Muscles," Nov. 21, for an interview with Van Damme.) 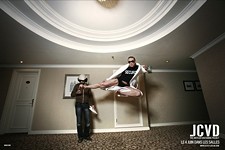 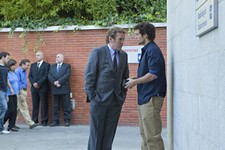 The Cold Light of Day
A young businessman on vacation in Spain with his family becomes caught in a tangled web of espionage and intrigue in this lackluster follow-up by the director of JCVD.