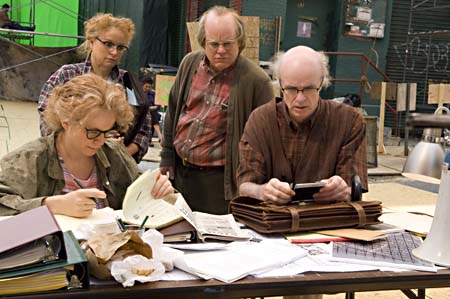 Worry not, for the time being, about the definition, pronunciation, or meaning of "synecdoche." For the purposes of this review, this movie’s title translates as only one thing: masterpiece. Screenwriter Kaufman’s first venture as a director is audacious, ambitious, amazing. It’s also intricate, self-referencing, and all-encompassing. Kaufman creates an alternate reality, a reality as elaborate and purposeful as any good fantasy film yet as grounded, detailed, and recognizable as life as we know it to be. Kaufman’s film fantasies are not conventionally populated by extraterrestrials, hobbits, prehistoric creatures, or the like (see Being John Malkovich, Human Nature, Adaptation., and Eternal Sunshine of the Spotless Mind for reference); his manifestations come from deep within the cerebrum and generate characters who look like you and me (and the members of his cast). They are our haunted doppelgängers or the visions we sometimes catch in the corners of our mirrors: images of the people we might be were we not who we are. And, complicating the truth of those images, these alternate figures would be completely unimaginable were we not precisely who we are. Conundrums and mind play form the bulwark of Kaufman’s scripts, and their presence tickles the brain like a lucid dose of nitrous oxide. His movies provide a safe place for our conceptions of self to run loose and imagine the possibilities. Now, as the director of his own, most ambitious, script, Kaufman allows free rein to the reverberations of his fantasies, taking us into the echo chamber of his thought process instead of corralling them into three-act symphonies as did Spike Jonze and Michel Gondry, the sympathetic directors of his previously mentioned films. Synecdoche, New York is anchored by the always remarkable Hoffman as upstate New York regional theatre director Caden Cotard, whose marriage, relationships, home, and health are all seemingly crumbling. When he receives a MacArthur “genius grant," he decides to mount a massive theatre project and moves to Manhattan from Schenectady (hint: the title’s pronunciation is much like the city’s, and the word is a grammar term that indicates a part of a thing standing in for the whole). Cotard wants to create a great work of art, something that will outlast him and quell his anxieties about separation, inadequacy, decay, and mortality. He takes over an empty warehouse, and then another one, and populates it with actors who are playing representations of themselves and other figures in his life. As the project cascades over decades, we watch the characters change and age and acquire their own doppelgängers, too. Time is both concentrated and elongated in the movie; continuity becomes confused; chronology goes haywire, caught between stasis and anti-stasis. All the while, Cotard is trapped by disappointment and an inability to move beyond this rehearsal of his life. The absurdity grows, and so does the film’s humor. In addition to Hoffman, Synecdoche has attracted an incomparably great group of actors to flesh out these various aspects of Cotard’s life, and crew contributions from the likes of cinematographer Frederick Elmes and music composer Jon Brion add strong creative support to the first-time director. Like Caden, audience members may be haunted by a feeling that there’s supposed to be something else to all this: Synecdoche is the kind of movie that rewards repeated viewings. But sometimes, as Van Morrison sings, it’s just best to “sail into the mystic.” See "Are You There, World?" Nov. 14, for an interview with Kaufman.

Anomalisa
Charlie Kaufman goes inside the minds of puppets