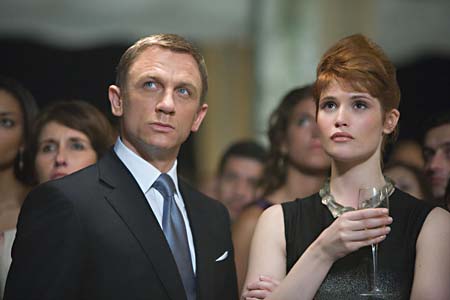 Forgive me, Sir Roger Moore, but I have forgotten you entirely. Shocking, I know. You used to be so persuasive, so cuttingly urbane, a veritable saint on His Majesty's Secret Service, doling out fisticuffs and dryly sexualized bon mots as though they were some special language all your own. At least, I think you did all that. As I said, my mind is a bit fuzzy on your various tenures as agent provocateur, although I do recall that other fellow, the Scotsman, whatsisname. He was craggy even in his youth and therefore lodges in the mental craw somewhat more pointedly. Connery. That's the one. Aged well, he did, like Edinburgh. Not so much you, Sir Moore. Ah, well. At least you're not relegated to George Lazenby's fate: Having to tussle with Jimmy Wang Yu in The Man From Hong Kong was by all accounts a near-death experience. (Great Ozploitation flick, though; you should check it out!) I suspect I'm not the only one, either, who has relegated his Moonraker and The Man With the Golden Gun DVDs to the dustbin of Bond history. The blame, to be sure, falls squarely on the shoulders of new Bond Daniel Craig. His onscreen charisma and exquisitely thuggish charm are such that he could likely revitalize any number of flagging film franchises with little but a three-second cameo: Mission: Impossible, XXX, The Little Rascals. You name it, Craig's vicious arctic eyes will kick things to a whole new level of goodness knows what. I haven't seen star wattage this laser-focused since Gert Fröbe attempted unauthorized gender reassignment on 007 way back in Goldfinger. Quantum of Solace proves that Casino Royale was no fluke. Director Forster may have seemed an odd choice initially. His CV is loaded with smart, probing films, among them Monster's Ball, Stranger Than Fiction, and The Kite Runner, but nothing in it seemed remotely Bondish. But he proves more than up to the task of shepherding James Bond and new Bond girl Kurylenko through a convoluted but not unmanageable plot as both ricochet around the globe in parabolas of vengeance. Quantum opens mere minutes after Casino Royale ends, with the boy terror of British intelligence's MI6 putting a couple of dings in his beloved Aston Martin DBS while being pursued down the mountain passes surrounding Italy's Lake Garda. He's searching for the person or persons unknown who were responsible for the death of Royale's Vesper Lynd and continues to do so throughout the film. He's aided in his below-the-law shadow vendetta by Kurylenko's Camille; they're both seeking Dominic Greene (Amalric, late of Munich). Meanwhile, back at MI6, Dench's M is becoming increasingly paranoid about the mysterious "Quantum" group, Giannini's ever-helpful Mathis is possibly setting himself up for a major fall, and Bond is bloodier and more enraged than we've ever seen him. Paul Haggis' script (with Neal Purvis and Robert Wade) focuses not on the wages of sin but of vengeance, and they appear to be considerably more corruptive. Quantum feels, somewhat, like part two of some sort of very nasty Bond subgenre – it's a grim, dark, and relentlessly violent film throughout; James Bond as Terminator rather than Templar – but it delivers the goods in bloody high style: explosively, sexily, and with 007 shaken (not stirred) to his icy core.