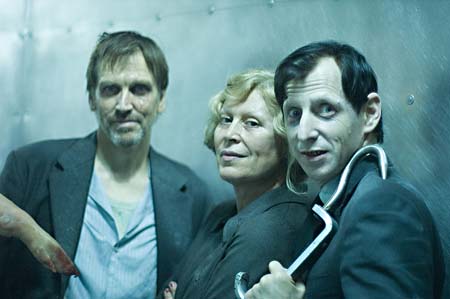 Does God hate horror films, secular or otherwise? Certainly, to judge from the patchwork nonscares in House, he's no fan of contemporary Christian genre filmmaking. Possibly he has his hands full elsewhere, cinematically – Bollywood alone surely presents a pressing challenge to a Christian deity inclined toward 24 frames per second transubstantiation. There have been many abominations littering genre filmmaking of late, mediocrity and worse masquerading as genre fare. They encompass everything from the rise of indefatigable German director Uwe Boll (his detractors call him the devil, as do his supporters) to Paul W.S. Anderson (his most recent, Death Race, made me want to sin all over the place, and not in a good way, either). It's not for a lowly acolyte such as myself to presuppose the infallible, the ineffable, or the potential film illiteracy of any deity, much less the one who allowed Charlton Heston the lead in The Ten Commandments and The Omega Man. That way lies madness. House, however, I can dwell on if not in. A Christian-themed horror film adapted from Ted Dekker and Frank Peretti's novel of the same name, House has been produced by Namesake Entertainment, which previously produced a theatrical version of Dekker's novel Thr3e. I haven't read either book, so I can't vouch for the purity of this adaptation, but speaking as a lifelong fan of the macabre, House has nothing on Steve Miner's riotous 1986 horror-comedy House or, for that matter, the Fox network's physician-as-yukster television program House, M.D., which, frankly, makes me squirm. Bickering marrieds Jack (Rosales) and Stephanie (Dippold) find themselves shunted off the highway to heaven and onto AC/DC's more intrinsically fascinating thoroughfare after an Alabama traffic cop (Madsen), clasping a live chicken to his chest, gives them wrong directions. Evil! They end up in a creepy (and nicely art-directed) mansion alongside another couple (Davis and Emery) and the house's owners, a freakish, familial clan straight out of Southern Gothic. Menaced by a gun-toting maniac outside the house and The Devil's Rejects' Moseley inside, the couples must confront and confess their prior sins before they gain any hope of making it to the proverbial church on time. House has a few moments that ring genuinely eerie, but the cluttered, unconvincing dialogue – not to mention Moseley's ongoing penchant for crazed overacting – make it more of a genre curiousity than anything the Fangoria gang would likely want to sit through. And it's anybody's guess why this very nearly bloodless haunting was tagged with an "R" rating by the MPAA. Truly, the Lord works in mysterious ways. 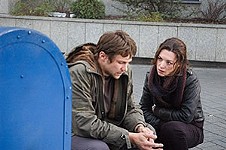 Thr3e
A Christian psychological horror thriller based on a novel by bestselling Christian author Ted Dekker, Thr3e nevertheless adopts the extreme-horror tactics currently in vogue in movies such as the Saw continuum.