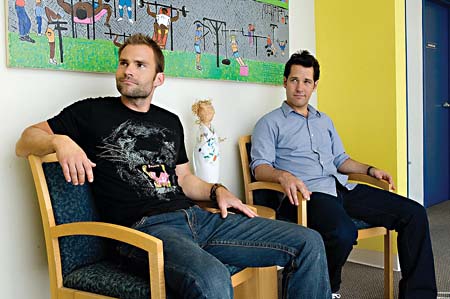 Misanthropy in the movies has a new face. And, surprising to say, it’s a handsome one. A matinee-idol face, in fact. Some might even go so far as to call it “dreamy.” It’s the face of Paul Rudd, a talented comic actor who’s spent the better part of his 15-year career floating just below the superstar radar, backing up less talented comic actors in movies such as Knocked Up, The 40 Year Old Virgin, and Anchorman, seemingly without complaint or bitterness. Now, at last, Rudd has his shot at the marquee (I’m going to ignore this year’s abysmal Over Her Dead Body if it’s all the same to you), and he makes the most of it, mainly by defying all reasonable Hollywood expectations of what a marquee role is supposed to be. His character in Role Models, Danny Donahue, is cranky, cynical, mean to children, endlessly put-upon, bad with women, and in the midst of an epic existential crisis. He’s like W.C. Fields with chiseled cheekbones and bedroom eyes. Too smart for his own good by half and stuck in a job peddling an energy drink called Minotaur to elementary school children, Danny knows he’s a failure, and he takes out his frustrations on unsuspecting Starbucks baristas, unmoved tow-truck drivers, his long-suffering girlfriend (the ubiquitous Banks), and his blissfully self-indulgent, sexually omnivorous partner in caffeine shillery, Wheeler (Scott, once again playing Scott in a role that could only be played by Scott). When Danny snaps one day under the influence of too much bitterness mixed with too much Minotaur, he and Wheeler are forced by court order to take part in a child-mentoring program called Sturdy Wings (run with hawklike vigilance by the indispensable Lynch), where they learn the value of caring about others while struggling to provide guidance to a teenage nerd who lives for his foam-sword medieval-fantasy battles (Superbad’s Mintz-Plasse) and an 8-year-old with the mouth of a David Mamet character (“Fuck you, Miss Daisy” is the boy’s response when Danny tells him and Wheeler to be back with the car at a certain time). Beautifully cantankerous for 45 minutes or so, it’s all downhill for Role Models once its two self-involved antiheroes actually start turning into role models, and the transition from feel-bad to feel-good comedy is all the more painful for its squelching of Rudd’s cosmically dyspeptic disaffection. Unlike other recent Judd Apatow and post-Apatow comedies that push the boundaries of what’s funny by pushing the boundaries of good taste, Role Models – for a while, at least – pushes the boundaries of what’s funny by daring to argue that good taste doesn’t mean a thing when you’re staring into the abyss, and the abyss is staring back at you, and you realize that you’re too depressed to care. 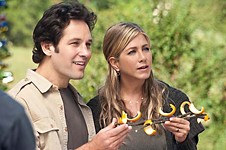 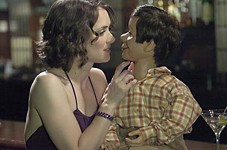 The Ten
Quirky comedy sketches illustrate each of the Ten Commandments.