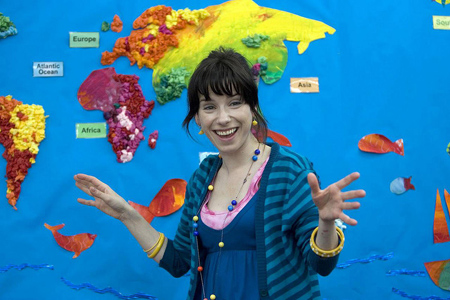 While recently suffering through the cheerful escapades of Pauline “Poppy” Cross (Hawkins), the heroine of new Leigh film Happy-Go-Lucky, I couldn’t help wondering, “Could this perpetually giggling, insanely positive girlish girl of a woman really have sprung from the same fevered mind that unleashed Johnny – the scabrous, antagonistic, misanthropic antihero of Naked – on the world?” It seems unlikely, and yet there it is: Leigh’s name above the title. From here on out, nothing will surprise me. Leigh’s latest is the story of a preternaturally joyful woman (the kind of maddeningly bubbly creature you want to strangle on the bus or in line at the grocery store) who parades about London wearing a perpetual smile, quirky outfits – complete with cowboy boots and multicolored tights – and dozens of rings dangling from her wrists and ears, clanking as she goes. Like Will Rogers (and only Will Rogers) before her, Poppy seems to like everyone she meets. And her cheerfulness is indomitable: She laughs at her job; she laughs with her girlfriends at the pub; she laughs at the doctor’s office. Not even an encounter with an abused child is enough to stop her from laughing, and that's the film's problem: Leigh's creation is fixed and unchangeable, admirably optimistic as a person but completely unengaging as a movie character. Who wants to watch a film about someone who’s discovered nirvana on earth, who’s learned the answer to the universe’s great unanswerable questions and who therefore has no need to keep asking them? Argue for deeper psychological meaning if you want to, but Poppy’s happiness isn’t a defense mechanism or a coping device or an act of heroic sublimation in response to some horrible tragedy; it’s just who she is. Like a child on summer break, she laughs, and she sings, and she jumps on trampolines, and she says things like, “It’d be amazing to fly, wouldn’t it?” out loud without embarrassment, and she glides through the world, from first frame to last, like one of God’s cherished innocents. And so the question lingers: If emotional variation is at the heart of the human experience, and if our attraction to movie characters depends primarily on our ability to relate to them as humans, then how static can a person be before he or she isn’t considered human at all and we as an audience stop caring?