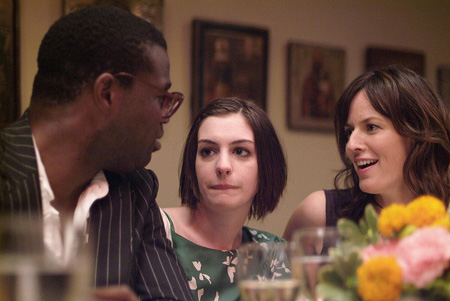 The upshot to a ticking bomb is that it only explodes the once, but Rachel’s sister, Kym (Hathaway), goes off again and again. She is a recovering addict let out of rehab long enough to attend the wedding of her older sister, Rachel (DeWitt), to a musician named Sidney (Adebimpe, of TV on the Radio). The wedding party represents a rainbow array of multiculturalism, the bride and bridesmaids wear saris for the ceremony, and throughout the weekend, musicians break into impromptu song on the front porch. It’s sort of a boho creative's sweet dream of a wedding, filled with light and joy and artistic expression … into which stomps Kym, the slouching, raccoon-eyed, self-described “nightmare." She uses the occasion of Rachel getting married to make amends, but even the seemingly good intention of that is a symptom of her self-absorption. She's forever trying to muscle her way in, grasping for attention, for ownership of a moment. And the best way to get everyone’s ear? Play the ticking bomb. Demme, who returns to more intimate territory after years spent skipping between socially minded documentaries and capital-letter big pictures such as Philadelphia and Beloved, takes an unhurried, you-are-here approach with the camera. He turns inside out an extra-long scene of rehearsal-dinner toasts that might have been a bore were it not for Kym’s banishment to the losers' end of the table. The scene leisures along, one loving speech after another; in contrast, Kym purses her lips in symbolic Siberia, working her brain over how best to wrangle the attention back to her. And then she pounces. It’s a pattern that repeats throughout the film – tension and release, and never any relief in the release. The script by first-timer Jenny Lumet intelligently uses that habituation as a surrogate – a small, squirming window for the audience into the family’s relationship to Kym and her addiction. With all the celebrity gossip and cover shoots for fashion glossies, one forgets that Hathaway began her career as the insecure “before” in Cinderella stories like The Princess Diaries; here, it’s a resurgence of that lovely ungainliness that keeps her Kym from being merely a monster or a boor or just another heartbreak chronicle of addiction. In fact, she is all three, as well as maternally starved, guilt-stricken, and grappling with her God. Hathaway is at her absolute best when she's bouncing off of the terrific Irwin (as her father, Paul) and DeWitt, the other two legs in the deeply damaged family unit. There are a lot of good actors here – too many, maybe. Supporting parts by Winger, as Paul's first wife, and Deavere Smith, as his second, get shortchanged, although Demme has a large enough heart to give everyone at least a moment of spotlight. Smith's comes in the middle of another shouting match between the sisters, with Dad ever the referee; when those three move the fight into the kitchen, the camera lingers in the living room, as Smith and Adebimpe – second wife and soon-to-be son-in-law – share a split-second look that is freighted with multiple meaning. Demme and Lumet's collaboration hangs, often brilliantly, on the contradictions in those multiple meanings, and those contradictions produce the multiple effect of feeling raw, knocked about, and strangely spiritualized post-viewing. Not a bad day at the movies, if you ask me.