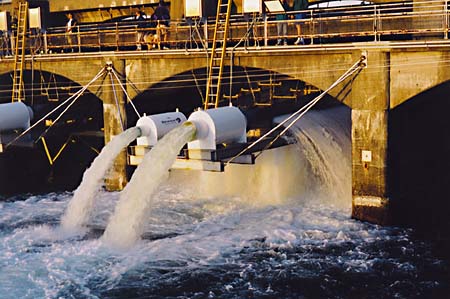 Flow: For Love of Water

When you grab a bottle of Poland Spring water and look at the label, with its idyllic blue stream rushing down a mountain pass lined by evergreen trees, what comes to mind? Do you picture long hikes and crisp country air? Do you imagine long drafts of chemical-free, environmentally friendly refreshment? Are you inspired to thoughts of health and purity? Or do you find yourself worrying about bacteria and arsenic and rocket fuel, about vast multinational bottling corporations ruining local economies and ecosystems and mangling water supplies in destitute Third World villages and middle-American hamlets? Do you picture wealthy white men in blue suits in conference rooms playing God, choosing who lives and who dies, and bending the natural world to their whim? Well, if you’re in the first camp, I hate to tell you, but you’ve been hoodwinked: What’s in that bottle in your hand is no purer than what’s coming out of your bathroom sink. And if you’re in the second camp … well, your friends probably find you painfully depressing to be around. That being said, after sitting through Flow, a documentary about the current state of our water supply, I’d be hard-pressed to come up with a more reasonable reaction to the fate of our miserable, greedy little world than paralyzing depression. Calling on dozens of firsthand and expert accounts of the degradation of the world’s water supply through environmental indifference, chemical irresponsibility, mass privatization, and corporate chicanery – and focusing on how that degradation is playing out in small villages and crowded cities from India to China, from South Africa to Michigan – Flow is the kind of terrifying, impending-apocalypse documentary none of us wants to watch but all of us probably should; it isn’t the most enjoyable experience you’ll have at the movies this year, but I wouldn’t doubt if it’s one of the most eye-opening. For example, I had no idea polluted water was causing gender homogenization in African fish populations or that there exist in the world corporations named Suez and Vivendi that have managed to convince the World Bank and the International Monetary Fund that water should be privatized like any other commodity and then sold to impoverished people for a profit, regardless of the human cost. And I definitely didn’t realize that the amount of money Americans spent on bottled water last year would be enough to provide clean drinking water to the entirety of the world’s population, without exception … though I probably could have guessed. It’s strange thinking of water as a market commodity, and it’s hard to comprehend the kind of greed that must go into keeping it from needy mouths, but, fact is, the water business is now the world’s third-largest industry, meaning there are a lot of sinister souls out there fiddling with their bank statements while Rome dries up.