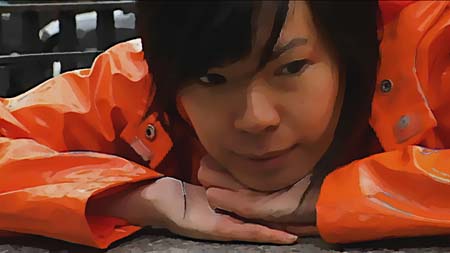 Year of the Fish

Lovely to look at, Year of the Fish is an animated feature that pops off the screen like a goldfish leaping free of its bowl. In much the same fashion as Richard Linklater's films Waking Life and A Scanner Darkly, which made use of Bob Sabiston's computer-aided rotoscoping technology, Year of the Fish creates an animated world from live-action images. The technique is a good fit for relating this modern-day fairy tale, at once making the artifice apparent and lending the story a certain timelessness and lack of specificity. Or maybe Year of the Fish works simply because, ever since Walt Disney came along, we've expected our fairy tales to look like cartoons. Year of the Fish, however, is a fairy tale for adults: It transposes the story of Cinderella to a Chinatown massage parlor. Ye Xian (Nguyen), an indentured Chinese immigrant who's traveled alone to New York City to earn money to send back home, is our Cinderella stand-in. Thinking she had come to work in a beauty shop, Ye Xian refuses to perform massages and is instead ordered to scrub the floors and toilets and do other scut work until her debt is paid off. On the streets of New York, she encounters both the strange, magical hunchback Auntie Yaga (Duk Kim) and the jazz accordionist Johnny (Leung). Auntie Yaga gives her a goldfish, and Johnny makes her smile. There is something intrinsically refreshing about seeing the Cinderella story updated with an all-Asian cast. However, there remain serious questions about who the targeted audience is for this film. Too dark and seamy in content for children too young to grasp the concept of massage parlors, Year of the Fish is also too undeveloped and predictable a story to appeal to adults. Without the animation layered on top of the action, the film would be thoroughly lacking in dramatic interest, which leaves only the visual palette of any interest to viewers. And given that the animation process is long and arduous, it seems a difficult path to pursue for such minimal payoff. Today's Special
This film about a young American taking over his family's Indian restaurant is inspired by an Obie Award-winning play by The Daily Show With Jon Stewart's Aasif Mandvi.