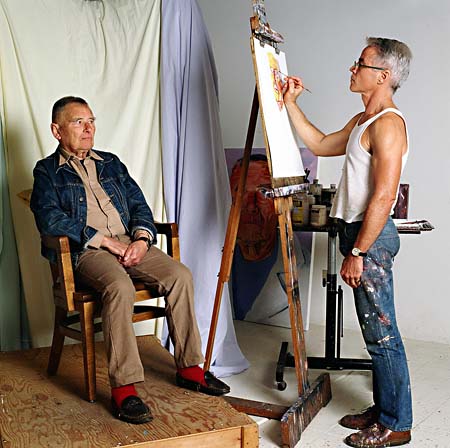 Chris and Don’s love story is one that, without context or, frankly, the pre-awareness of its conclusion, might raise a red flag for those less permissively minded. It began in the early Fifties, when Christopher Isherwood, a British émigré and the celebrated author of Goodbye to Berlin (on which the musical Cabaret was based), had set up camp in Santa Monica, Calif., where he met Don Bachardy. Bachardy was 16 at the time. Isherwood slept with Bachardy’s older brother first, and when the two began their own relationship, Bachardy was still a teenager. A scandalous beginning, to be sure – and Chris & Don: A Love Story (which screened at this year’s Austin Gay & Lesbian International Film Festival) doesn’t shy away from that fact, but, queasy origin story aside, the union went on, mostly happily, for another 30 years. The documentary, made after Isherwood’s death and with Bachardy’s enthusiastic participation, is as much a love story as a chronicle of Bachardy’s maturation into a man and an artist; cowed as a young man by Isherwood’s impressive circle of friends, from W.H. Auden to Leslie Caron, Bachardy eventually distinguished himself as a gifted portraitist. It’s the inclusion of these drawings to illustrate the span of their relationship that elevates Chris & Don from your everyday, historical-footage-heavy documentary into something livelier and more immediate, even transcendent, as in the final scenes when Bachardy discusses Isherwood’s slow death by cancer and his daily sittings with his lover, the fruits of which Bachardy shows, quite movingly, to the camera. The only stylistic stutter in this otherwise measured documentary is a cutesy motif that animates Isherwood and Bachardy’s pet animal names for each other. It closes the film in what I suspect was intended as something of a happy ending, but it’s unnecessary: Thirty happy years should be happy ending enough.