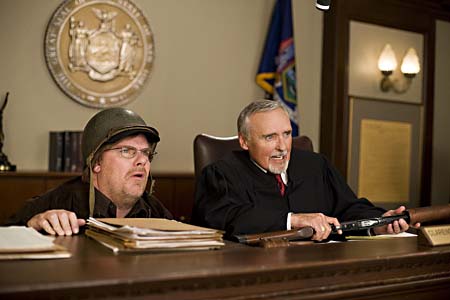 David Zucker, the man who, with his brother, Jerry, and Jim Abrahams, practically invented the modern-day spoof genre with Airplane! and then helped drive it into the ground with the Scary Movie and Naked Gun series, is back with this new spoof of Michael Moore and left-wing Hollywood. An American Carol demonstrates that Zucker is still on a downward creative trajectory. This movie is seriously unfunny, and it's not just my admittedly left-wing politics that are in the way of my getting the joke. There's no question that documentarian Moore deserves some ribbing, but this movie couldn't find Moore's ribs (or funny bone) through all the blubber and hotheadedness it puts in the way. Farley (brother of Chris) is cast as the documentary filmmaker Michael Malone and proves to be a fairly decent stand-in for Moore. But this story, a takeoff on Dickens' A Christmas Carol, is poorly told and soon makes Moore's one disastrously received fictional comedy film, Canadian Bacon, look like pork loin. Grammer also plays a significant role as Gen. George S. Patton, the ghost of the past, who shows Malone such things as zombie American Civil Liberties Union lawyers who should be shot on sight and what America would look like today if Abraham Lincoln had been a negotiator like England's Neville Chamberlain instead of waging the Civil War. Malone would be a present-day plantation owner with slaves played by Grier and Gary Coleman, among others. Grammer, a dependable actor in most circumstances, is more Spam than ham here. Voight shows up as George Washington, and country singer Adkins appears as the Angel of Death, who shows Malone the new Hollywood, which has been named Bin Laden City and has billboards for Victoria's Burka. Meanwhile, this jumble of scene shifts is narrated by Nielsen to a bunch of kids at a Fourth of July picnic. Bill O'Reilly, Paris Hilton, and Mary Hart show up as themselves, and there's a subplot about Afghan terrorists who try to dupe Malone into making a new training video for suicide bombers and in the process attempt to blow up Madison Square Garden. The laughter of the one other viewer in the theatre with me subsided after the first 15 minutes, when generosity started wearing thin. Michael Moore has nothing to fear from David Zucker. 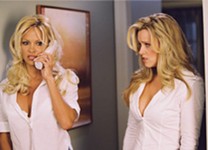