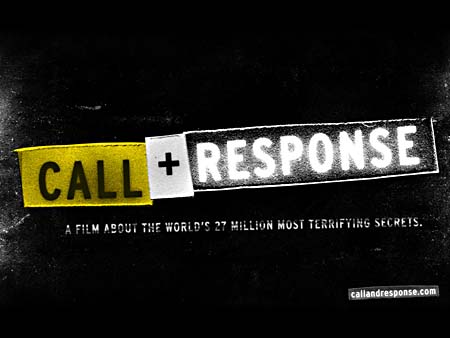 While on tour several years ago, West Coast-based singer-songwriter Justin Dillon met a young Russian translator who awakened him to the horrors of human trafficking, an astonishingly profitable industry that includes child labor and sex slavery. Back in the States, Dillon made it his mission to bring greater awareness to the issue and did so the only way he knew how – by galvanizing his musician friends and corralling them together to make this documentary-cum–performance film. Dillon lurchingly crosscuts between gut-wrenching interviews with the likes of humanitarian and actress Ashley Judd and The New York Times columnist Nicholas Kristof (who recounts buying two interview subjects out of slavery at a Cambodian brothel and getting a receipt for it) and black-and-white footage of soundstage performances from Matisyahu, Cold War Kids, Moby, and Emmanuel Jal (a former Kenyan child solider). It’s a pattern that repeats throughout: a snatch of devastating statistic, a longer slice of performance. It’s an unsatisfying, schizophrenic style of filmmaking that sells the audience short – did Dillon think we wouldn’t be interested in the cause were it not for British songstress Natasha Bedingfield’s sad-eyed endorsement? The real problem, however, is in Dillon’s inability to take a back seat. He has a whole host of field experts at his disposal – and, when given the chance, they speak movingly on the subject – but too often he cuts back to himself, explaining again why he’s so upset and what music has to do with the answer: "The more and more that I put slavery and music in the same room, the more I realized how much they knew about each other – how informed they were of each other.” As far as thesis statements go, it’s a pretty fuzzy one, but it did set up a rhapsodic tangent from academic Cornel West. (His later monologue on “the sublime beauty of funk” is itself a thing of sublime beauty – and by funk, he’s not just talking Funkadelic but an essential, down-and-dirty humanity that dogs us from “womb to tomb.”) There are times when the duty of the critic runs counterpoint to one’s duty as a human citizen of the world, which is a roundabout way of saying that while there is much to recommend this earnest and enraged film, it has more to do with its earnestness and rage than with the actual mechanics of its making.