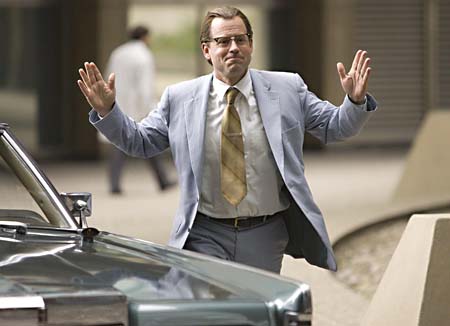 Flash of Genius, the directorial debut of producer Abraham (Children of Men, Spy Game) has all the ingredients of a great American drama. Based on the true story of engineer Robert Kearns – who, in 1963, invented the intermittent windshield wiper, only to see his idea stolen by the Ford Motor Co. – it’s real David and Goliath stuff, a battle between the forces of corporate greed and chicanery on one side and an extremely stubborn individual human spirit on the other. Like Tucker: The Man and His Dream and Erin Brockovich before it, Flash of Genius should have been one of those movies that makes all of us feel better about ourselves by fooling us into believing that, under the same circumstances, we would have been the ones standing up to those titans of industry. So why, exactly, does it feel so bland? Could it be its hero? For all his engineering prowess and persistence, Kinnear’s Kearns is an idealized and rather bloodless Hollywood vision of the early-1960s Midwestern American male: decent, hard-working, guileless, loyal, patriotic, and fertile. In other words, despite an obsessiveness bordering on (and occasionally toppling over into) mania, Kearns just doesn’t have the kind of larger-than-life personality we look for in our cinematic little-guy heroes. He is, on the contrary, quite dull, and 100 scenes of him slaving away in his basement or a library or in a courtroom don’t make him any less so. Then again, maybe the problem with the movie is the way it’s shot. Conspiracy films, by definition, have to be built slowly and meticulously, brick by brick, until a sense of overwhelming, asphyxiating odds becomes palpable. But for all his years in Hollywood, Abraham is at a loss when it comes to pacing, and where his film should revel in the minutiae of a slowly unraveling mystery and a slowly unraveling mind, he instead leaps forward in time by months and years every chance he gets, jarring audiences as he goes, leaving them always a few steps removed from his hero’s pain. Or maybe, in the end analysis, the problem is simply a matter of identification. Kearns, who was so of his time and so not of ours as to be almost a different species, walked hands down/chin out into a classic con job – what kind of fool hands over profitable blueprints to potential competitors without getting something in writing? – but he did so in the early 1960s, a time when not all Americans looked at big business with cynicism and suspicion, when a man like Kearns could still believe in Ford as a paragon of American corporate virtue. Maybe he was a sucker, but it was his belief in the fundamental decency of American institutions that made his struggle for redemption so winning, much more so than the movie that was made to honor it. 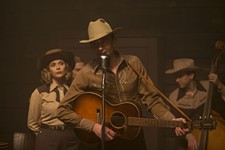