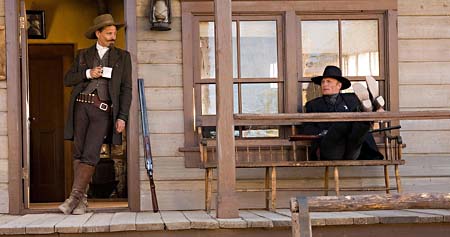 We've heard tell about the rebirth of the Western at least since Clint Eastwood's vicious, Unforgiven 16 years ago, but since the genre never truly died in the first place there's no need to flog that horse here. (Maybe it's best to look at the Western as something undead, or occasionally reanimated, like Sam Raimi's hyperactive The Quick and the Dead or this year's comic-epic South Korean import The Good, the Bad, and the Weird.) Every generation gets the Western it deserves, and Appaloosa is a suitable slow burn punctuated by sudden acts of violence; it fairly oozes off the screen like bloodied molasses, and then, heated, bubbles up and over, all smoke and fire and endless clouds of New Mexico dust. It's 1882, and lawmen-for-hire Virgil Cole (Harris) and Everett Hitch (Mortensen) arrive in the titular township, a barely conceived place of wood and dirt and whiskey stuck to the arid hills and gullies like a bloodstain in a feedlot. They come at the town council's request: A scheming, would-be cattle baron by the name of Bragg (Irons, resplendent in his villain's finery and subtexting the inherent dangers of a nascent capitalist system on the range) has murdered the sheriff and his deputies and must be brought to justice, which, for Cole and Hitch, means finding a witness to testify against him, and then keeping both witness and Bragg alive long enough for the traveling jurisprudence to arrive in town to deliver the rule of law. No easy task, that, and it's complicated by the arrival in town of a comely, piano-playing widow, Allie French (Zellweger, wearing a permanent aw-shucks smile), who plays Virgil's heart like a seasoned pro. She's an opportunist in a place with few opportunities (for ladies it's love or death, take your pick). Harris, directing from an adaptation of Robert Parker's novel, cuts a leathery, desiccated figure as the love-blinded Virgil, laconically eloquent, forever groping for the right word (which his partner often supplies, a comic grace note in a serious film) but whispering his gun out of its holster with the blunt plain speaking of a born shootist. All three men look like graven images, but only Harris' eyes twinkle with anything approaching mischief. He enjoys his work maybe one bullet too much, and so when a chance at a real life appears to arrive, he reaches for it with his gun hand. He's got to get the lead out to get the lead into someone else, but his heart gets in the way. Even Shane, who is subtlely mirrored here by Mortensen, knew that spelled trouble. 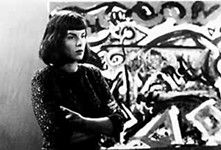 Pollock
Calling Pollock a labor of love is like saying Marilyn Monroe was easy on the eyes. The statement does a disservice to all involved. Harris ...