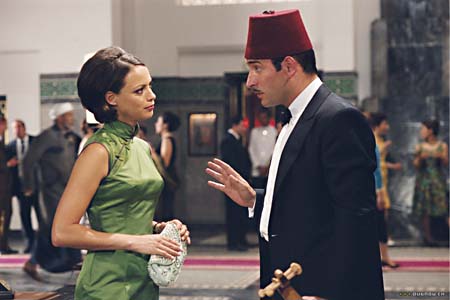 As Hollywood increasingly relies on ever less entertaining parodies of whole cinematic genres to sate an apparently insatiable public appetite for seriously dumb humor, the comparatively sophisticated yuks of Airplane! and The Naked Gun have devolved into the lowest-common-denominator yucks of the Scary Movie franchise and the viciously unfunny gurgles of Not Another Teen Movie, et al. Truly great parody relies in equal measure on both finely calibrated nuance and audience familiarity with the object of comic ridicule and not on how many fart jokes you can jam into an already bloated 90-minute running time. Austin Powers, for example, succeeded as much on the merits of its hyper-detailed production and art design as it did on Mike Myers' groovy, hirsute mugging. Its swinging, Bond-esque London looked, or at least felt, as real as its modern-day counterpart, and its subject of parody, the 007 films, was universally known. Leave it to the French to beat us at our own bizarrely self-reflexive comic shenanigans. OSS 117: Cairo, Nest of Spies is a model of smart, often very silly, but never, ever stupid comic perfection. Set in 1955, back when Cairo was bristling with anti-English antipathy over a looming Suez canal crisis and radical Islam was just getting warmed up, the French Office of Strategic Services sends its best man, Hubert Bonisseur de la Bath, aka OSS 117 (Dujardin), to Egypt to discover the whereabouts of vanished agent Jack Jefferson (Lefebvre). OSS 117 is, of course, a fatuous, self-involved, debonair jerk who attracts the leggiest ladies and trouble of every sort. But Cairo, Nest of Spies, is far more than a Clouseau-on-holiday knockoff. Simple, period touches like the frequent use of obvious rear-projection (a nod to Hitchcock and a wonderfully evocative gag in and of itself), an ongoing bit about OSS 117's nicotine independency, and an unexpectedly hilarious undercurrent of homoeroticism among spies of all nations conspire to make this a consistently entertaining parody that never once makes you feel like an idiot for laughing out loud at its idiocy. 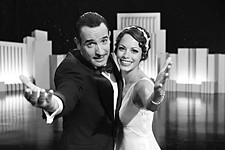 The Artist
It's a silent, black-and-white film for the 21st century, full of coy delights.