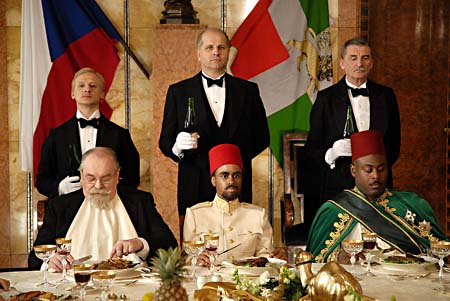 I Served the King of England

Jan Díte is a curious film creation: equal parts Charlie Chaplin, Buster Keaton, and Harpo Marx but with a self-absorbed indifference to the suffering of others to which none of those old-time comics (save maybe Harpo on one or two maniacal occasions) would ever dream of aspiring. The hero of I Served the King of England (played as a young man by Barnev), the newest film from Czech New Wave hero Menzel (Closely Watched Trains), has only three hopes: to be rich, own his own hotel, and bed as many women as possible. Nothing else concerns him. And whatever he has to do to realize those hopes is fully justified in his mind. Never mind that the riches he accumulates are stolen from the homes of Jews sent off to Nazi concentration camps; never mind that the hotel he works for and one day hopes to buy is being used as a breeding camp for Aryan supermen and -women; never mind that one of the many women he loves has to stare at a portrait of Adolf Hitler to get aroused for lovemaking: Díte lives to satisfy his desires, history and morality be damned. Anyway, that’s what I took away from I Served the King of England, which, for all its fairy-tale whimsicality and Amélie-like charm, struck me as a remarkably cynical, misguided, and, ultimately, confusing look into the world of the European aristocracy in the first half of the 20th century. Menzel lingers for long minutes over the naked bodies of seductive courtesans, the long tables and rich dishes of great feasts, and the lavish decorations of the great hotels of old Europe, inviting viewers to immerse themselves in all that decadence while a soundtrack full of delightful mazurkas and rhapsodies lull the ears. Fair enough. But when the Munich Pact is signed and Czechoslovakia is handed over to the Nazis and suddenly all that lavishness becomes the decor for despotic militarism, those rhapsodies play on, and the fairy tale continues, as if one world were interchangeable with the other: just two varieties of the human condition. In Menzel’s world, languid escorts, military invalids, haughty hotel maître d’s, and concentration-camp deportees are all filmed with the same eccentric, cinematic irony, and, in all honesty, I can’t figure out what he was aiming for. I Served the King of England, like its hero, is surrounded by and infused with the potential for meaning but feels like a lark: a bit of nothing whistling past the graveyard of 20th century European history without a thing to do but indulge itself.