I see a lot of movies. Some of them stick in the brain; a lot of them don’t. I mention this because I turned my house upside down trying to find the notes I scribbled a few weeks ago while watching Choke, a forgettable adaptation of Chuck Palahniuk’s 2001 novel. I never found the notes, but I did find a paperback of the novel, a reissue with “Now a Major Motion Picture” stamped on the cover. It’s not exactly false advertising: Veteran character actor and first-time writer/director Gregg (The New Adventures of Old Christine) did in fact make a motion picture out of the book, and I suppose the amount of manpower, money, and migraine attendant to any production amounts to something major. But Choke marks a very minor major. Rockwell plays Victor Mancini, a man of many hats, all of them off-putting. He’s a sex addict who goes to a recovery group mostly to score fresh meat; a medical-school dropout who pays the bills as a Colonial America re-enactor, with a sideline scam as a choking victim in restaurants; and an unloved, oft-abandoned son who's trying to lay the cute doctor (Macdonald) attending his Alzheimer's-addled mother (Huston). Mancini’s character boils down to a lot of self-loathing and unresolved mommy issues – which is as tedious as it sounds – and the film, shot by Tim Orr with the wanness of a porno flick, is only half as blackly comic as it should be (check out George Saunders’ novella CivilWarLand in Bad Decline for a far funnier rendering of the re-enactor’s plight). There are bright spots – the bearlike Henke as Victor’s best friend, a chronic masturbator with a sunny disposition, and the terrific Macdonald (No Country for Old Men), a native Scot who rather adorably mouths an American dialect like a Midwestern honors kid with a speech impediment. And I didn’t need my notes to remember that. 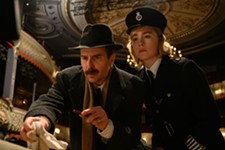