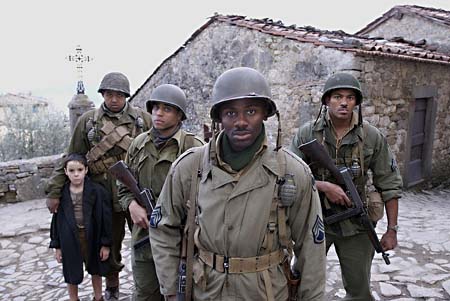 It’s inarguable that the accuracy of racial portrayals in American movies needs redressing. From historical visions to contemporary stories and across genres and all the various modes of cinematic expression, American filmmakers have always made movies the best way they know how, even though those ways are inevitably constrained and limited by the extent of what it is they know. Lee’s ambition to make a movie about the experiences of the African-American soldiers in World War II was exhilarating to consider since America’s most prominent African-American filmmaker would be taking on one of the most Caucasian of all movie genres: the American war movie. Sadly, Lee’s finished product, Miracle at St. Anna, is a major disappointment, especially as it comes on the heels of the filmmaker’s greatest commercial success, Inside Man. Miracle at St. Anna is a bloated, muddled, indistinct, and ill-paced movie (adapted by James McBride from his novel) that makes its 160 minutes seem like a tour of duty for the viewer. It’s a war movie and a murder mystery, a history lesson and a sentimental melodrama all jumbled together episodically and glancingly. The bulk of the movie is one long flashback about a group of four Buffalo Soldiers from the Army’s 92nd Infantry Division who get trapped in Tuscany behind enemy lines in 1944. Despite spending more than two hours in their company, these characters never develop beyond their signature traits into memorable human beings. Aubrey Stamps (Luke) is the smart, educated leader who has mixed feelings about the black man’s opportunities in America; Bishop Cummings (Ealy) is a handsome con man and ladies’ man who looks after his own interests; Hector Negron (Alonso) is a Puerto Rican from Harlem who’s the unit’s radio operator and translator; and Sam Train (Miller) is an oversized man-child, a “chocolate giant” to the shell-shocked Italian child (Sciabordi) he befriends, a religiously superstitious soul who carries with him through Italy a statuary head he found on the streets of Florence. This extended flashback is bookended by a contemporary (well, 1983) murder mystery in which Turturro as a police detective and Gordon-Levitt as a hungry newspaper reporter appear fleetingly. Lee summons all his singular stylistics here and adds some touches of magic realism to his repertoire. Terence Blanchard’s melodic but strident music score frequently overwhelms the visuals and leaves little to the imagination. And for all Lee’s ballyhoo about racial stereotyping, one might expect him to adopt a less hackneyed approach to his portrayals of Italians and women. Instead of the hoped-for pinnacle of his career, Miracle at St. Anna has turned into an ugly skirmish along the way.