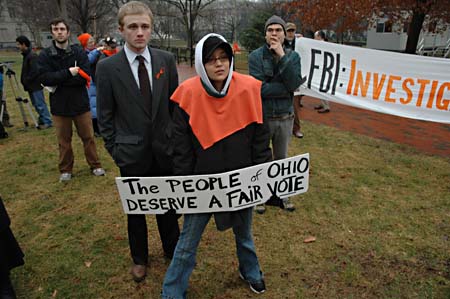 Anyone whose loyalties lie on the left side of the American political spectrum remembers Election Day 2004 with dread. The misery of deflated hopes, the sickening pall of a reckoning deferred, the agony of inexplicably reversed fortune: Days don’t come much worse than that. Some may have forgotten (some may have chosen to forget), but John Kerry was winning the election for most of that day; every afternoon exit poll had him up in most of the major battleground states. Which only made the events of that night that much more painful. As midnight approached on the East Coast, it was revealed that somehow the exit polls were wrong: Suddenly the 24-hour news channels were calling states for Bush they’d assured us would fall Kerry’s way, such as Florida and Nevada and the dreaded Ohio. Shocked and despondent, good lefties were left to stew in their grief and ponder the greatest of unanswered questions: What the hell happened? Documentarian Fadiman (When Abortion Was Illegal) thinks she knows the answer: Bush and Rove and the Republicans stole the election, stole it right out from under the noses of the American public, leaving voters, democracy, and the Constitution broken on the side of the road. Parsing polling data and conducting interviews with journalists, election officials, disenchanted voters, and politicos of various ideological stripes, Fadiman lays out a timeline of that fateful day – a day that will live in infamous-itude, as our president might say – from early reports of electronic-voting-machine shortages and malfunctions to midday talk of vote switching (whereby votes cast for Kerry were magically leaping onscreen to the Bush column, right before voters' eyes), from dinnertime footage of lines at inner-city polling stations stretching for blocks to the sad sight of Kerry conceding the election before some districts in Ohio had even closed their doors. To a die-hard partisan like Fadiman, all the anecdotes about voter malfeasance, polling-data manipulation, suspect election officials, questionable machine programmers, and mysterious statistical turnarounds can only add up to one thing: conspiracy and treason, Republican-style. It’s a conclusion she argues for with enthusiasm, and it’s hard to watch Stealing America without getting swept up in the current of political imagining, whether real or fantasy. The problem, however, is that Stealing America doesn’t contain a single objective frame, so it’s impossible for reasonable viewers looking for edification rather than just indignation not to question what they’re being shown and why. Even a dyed-in-the-wool skeptic with a liberal streak the size of Texas like myself finds it hard to fully believe charges of vote-stealing leveled by a film so clearly dripping with ideological intent. Stealing America is yet another in a long line of political documentaries that would rather sell you something than tell you something.