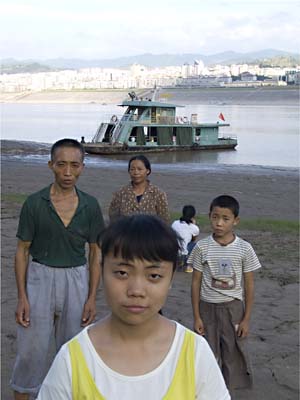 When the Three Gorges Dam on the Yangtze River began construction in the early Nineties, an estimated 2 million people’s lives were impacted. That’s a staggering number to contemplate, but Up the Yangtze effectively personalizes that near-meaningless number by putting a face on at least a few of those 2 million farmers and shopkeepers and other “common people” displaced by the rising waters of a river so beautiful and daunting that even Chairman Mao was inspired to write poetry about it. Canadian filmmaker Yung Chang, who made the film in part as a kind of elegy to his grandfather’s fast-disappearing China, likens the dam’s effect to what would happen if the Grand Canyon morphed into a Great Lake. For preteen Yu Shul, the effect is less dramatic but no less devastating: She must leave school and the hut her family squats in (where the rent is nonexistent, the farming land free for the taking) to earn money as a dishwasher on one of the tourist riverboats that lumber up and down the Yangtze. Renamed "Cindy" once onboard, Yu Shul is homesick and resentful; what she doesn’t realize is that by learning English and servicing Western tourists (never call them “old, pale, or fat,” the ship director cautions, only “plump”), her world is expanding in ways it never would had she stayed with her parents in the hut, a metaphorical sinking ship that will be submerged in water by film’s end in a sorrowful time-lapse coda. 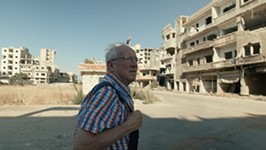 Up the Yangtze, Yung Chang