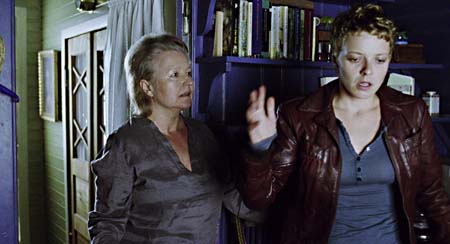 The Edge of Heaven

In the opening scene of Crash, Paul Haggis’ 2004 Academy Award-winning sermon on race relations, Don Cheadle’s character, Graham Waters, says: “In L.A. nobody touches you. … I think we miss that touch so much that we crash into each other, just so we can feel something.” When it was released, Crash was the leading light in a new school of filmmaking, a school that followed the dour adventures of dour, seemingly disparate characters as their lives dovetailed with and eventually smashed headlong into the lives of others, usually equally dour. Along with other practitioners of this form – in particular Alejandro González Iñárritu, the director of Babel and 21 Grams – Haggis believed that the inarguable interconnectedness of humanity could be best illustrated cinematically by being as loud and fervent as possible, subtlety be damned. Now comes the inevitable, and welcome, calming of the form. In Akin’s The Edge of Heaven, people don’t explode into one another’s lives in fits of racial animosity or random violence; instead, they brush by one another in the street and look past one another as their trains pass, unknowing, illustrating the far more convincing and far more sophisticated argument that, yes, we’re all connected, but most of the time, most of us have no idea. The film, split into three chapters, is a transgenerational, transborder microcosm of modern cultural melding. First there’s Ali (Kurtiz), an old Turkish pensioner living in Germany, whose violent encounter with a prostitute (Köse) forces his son, Nejat (Davrak), a college professor, to forgo his life in Hamburg and go to Turkey in search of the woman’s daughter, Ayten (Yesilçay). Little does Nejat know, however, that Ayten, an anti-government radical, has fled to Germany to escape persecution, where she meets and falls in love with a young student (Ziolkowska) whose mother (Schygulla) wears her disapproval like a protective cloak. So, here you’ve got six lives, all connected and all reflecting some part of the modern cross-cultural experience, both in Old Europe and the soon-to-be-New Europe. It’s an issue Akin explored brilliantly in his 2004 film Head-On, in which confusion over cultural identity didn’t just define lives; it burned them up from the inside out. But in The Edge of Heaven, a more tempered Akin seems content to allow the incidental lives of incidental people merging incidentally to pass quietly and at their own paces. Which indicates a much-needed maturation of the Babel/Crash formula but also fails to rattle your bones the way those movies did. Pick your poison, I suppose.