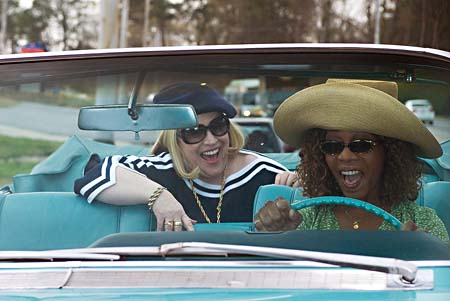 Tyler Perry's The Family That Preys

Contradictions abound in this messy and unfocused drama that purports to believe that family is everything, when all else fails. It’s as if director/screenwriter Perry created a cast of characters with split personalities. One minute, the nicest guy in the world is clueless about his self-centered wife’s infidelities and the fact that she treats him like dirt; the next thing you know, he’s hitting her in the jaw so hard that she literally flies across the room. By way of further example, a wealthy matriarch and businesswoman appears to be having a midlife crisis, occasionally lapsing into a kind of depressive state; suddenly, she’s spitting out venom and acting like some caricature of a power-hungry woman who’s grown testicles. It’s drama for the sake of drama, which only underscores the fakery of it all. Perry may think he’s given his film’s characters dimension and complexity by investing them with multiple characteristics, but all he’s really done is demonstrate that he’s not spending enough time meshing character development and plot together in a way that it all makes sense. There are some nice moments in this movie that centers on an enduring friendship between two very different women, particularly when they embark on a cross-country trip in a baby-blue Cadillac and fancy themselves a middle-aged Thelma and Louise. Unfortunately, the soap opera shenanigans of their offspring significantly detract from that otherwise interesting relationship. Old pros Bates and Woodard do their best in their performances as the two female leads, but it’s not enough to save this movie from itself. Which is too bad because Perry has an occasionally good ear for dialogue (and an atrocious one when in unknown territory), and he has a keen sense of the loving familiarity that binds friends and spouses together. No doubt, with movies like The Family That Preys, Perry is trying to prove that he can do something more than put on a housedress and reprise the role of a no-nonsense grandmother that made him famous, for better or for worse. It’s a strategy that isn’t working. Bring on the next Madea movie, and bring it on quick!