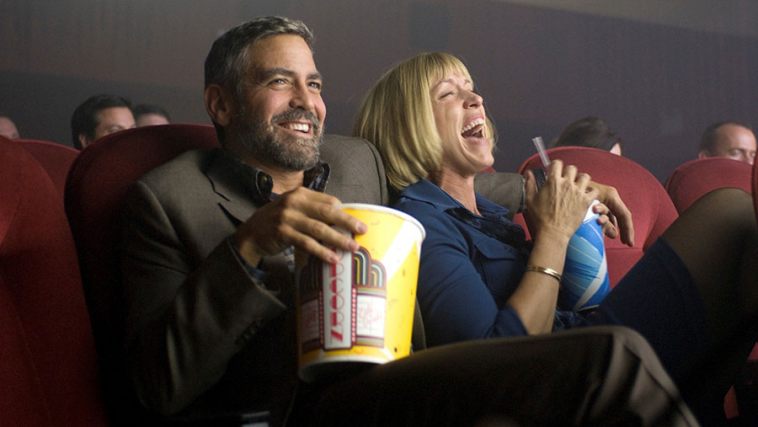 Burn After Reading, the new film from the Coen brothers, won’t be mistaken for Fargo anytime soon. Or Barton Fink or The Man Who Wasn’t There. Those films were black comedy done to perfection: They coerced viewers into laughing out loud at murder and moral decay and the vast emptiness of an uncaring universe and thereby made them complicit in all the nastiness unfolding onscreen. Burn After Reading is something different and something less – something new, possibly, and definitely something only the Coens would attempt in this day and age: screwball black comedy. Not since Arsenic and Old Lace has there been a movie that brushes so flippantly over the worst kind of human behavior and disposes of its characters with such antic indifference. Rant or rave about Quentin Tarantino all you want: He’s got nothing on the Coen brothers when it comes to the casual snuffing-out of human life. Burn After Reading is a convoluted yet light-as-air farce about the dangers of misguided ambition and the contagiousness of paranoia. Osborne Cox (Malkovich) is a lifelong CIA analyst who is fired from his position at the Balkan desk when his love of alcohol becomes too much for the agency to abide. “You’re a Mormon!” he reminds one of his accusers. “Compared to you, everyone has a drinking problem.” Newly unemployed and indignant, Cox decides to write a memoir about his time with the agency but ends up instead on the wrong end of a blackmail scheme after his wife, Katie (Swinton), misplaces copies of his computer files she burned in anticipation of her divorce suit. Those files end up in the hands of a bumbling duo, Linda Litzke (McDormand) and Chad Feldheimer (Pitt), two likable, middle-aged losers who think they’ve stumbled upon classified government documents and figure they’ll make a little money selling them to the highest bidder, be he Cox, the cultural attaché at the Russian Embassy, or any other shady figure who might be interested. Litzke and Feldheimer are a classic ditzy comedy pair, and their pathological dopiness allows the Coens to mock the conventions of spy movies in a way only they can (“Is this a secure line?” Litzke asks one potential co-conspirator over the phone, sounding as if she just got through watching an I Spy marathon). But they’re also the movie’s Achilles' heel: heroes whose bulging-eyed broadness descends quickly into burlesque, meaning the increasingly depraved and dangerous consequences of their actions affect us less and less the longer the movie goes on. Say what you will about the cinematic joys of extortion, infidelity, espionage, paranoia, and random acts of graphic violence; if they’re performed by cartoons and not people, it’s going to be hard to get the people sitting in the theatre to care. The Coen brothers may be masters of black comedy, but there are times when there’s no point in taking them seriously.