What are the great themes in movie history, the ones that really get viewers’ hearts pounding? Love? Betrayal? Ambition? Passion? Greed? Loyalty? Bravery? Violence? Jealousy? Defiance? Sex? Adventure? Death? Those all sound good. We’ve got The Godfather in there, and The Great Escape and The Seven Samurai and The Seventh Seal and The Philadelphia Story and Sense and Sensibility. Not too bad. Now, how about these: Integrity? Responsibility? Diligence? Free enterprise? Am I boring you yet? If not, then by all means run out this minute, slap down eight dollars, and see Proud American, a shameless, soulless tribute to all things schmaltzy in the American character and a thinly disguised advertisement for corporate deregulation. For everyone else (and I mean “everyone,” be you white, black, conservative, liberal, Jew, gentile – anyone with even a drop of aesthetic sense), take it on faith that the short films you saw during the recent political conventions are subtler and more artfully done than Proud American. I should have known from the start, of course; any movie corny enough to claim that it’s “dedicated to the ideals of a free society” couldn’t possibly be worth the film it’s printed on. And any film that follows that dedication by proudly displaying the logos of its corporate sponsors – including Wal-Mart and Coca-Cola – and then proceeds to dramatize the founding of those corporations in gauzy, folksy, drearily written vignettes that wouldn’t stir the audience at an elementary school production of The Good and Decent Life and Lamentable Death of Abraham Lincoln, is simply too cynical to be acknowledged. Proud American was conceived, written, and directed by Fred Ashman, who is, according to the movie’s Web site, “one of the nation’s premiere corporate media producer/directors,” which means nothing to me except that he has no business making feature films and he’s a corporate shill. And so, having no business making feature films, he does what any corporate shill with an overdeveloped sense of national pride would do when charged with making one: He takes his camera onto a helicopter and shoots national monuments, parks, and mountain ranges from great and sweeping heights while patriotic music thunders away in the background, and then he comes down to Earth to tell a few short, woefully acted parables about the importance of faith, hard work, diligence, tolerance, and believing in yourself, punctuated by impossibly sentimental songs with titles like “Thanks God for Good People of Any Faith” and You Can Do Anything You Dream.” And then, just when you’re ready to throw up your hands, pull out your hair, and stomp out of the theatre to demand your money and your time back, Ashman summons the memory of 9/11 to manipulate you into thinking you’re a heartless, bloodthirsty, unpatriotic monster if you don’t buy into his vision of America. Proud American isn’t just lousy filmmaking; it’s propaganda disguised as a Hallmark card and set to the strains of “America the Beautiful.” 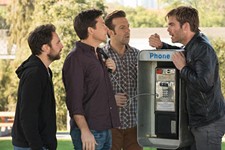