From Hands on a Hard Body to an 89-minute ogling of another hard body: It boggles the mind that 11 years after his engrossing documentary about an endurance competition to win a truck in Longview, Texas, filmmaker Bindler has channeled his talents into this regrettable comedy starring McConaughey in board shorts and nothing else (and occasionally even less, as in a tongue-in-cheek – remember the bongos? – cutaway to an in-the-buff McConaughey blowing a didgeridoo). He plays surfer Steve Addington, who's like some Rousseauistic wild child – his vocabulary only extends so far as women, weed, and the almighty wave. After a successful world tour, Addington returns home to Malibu to find his management has sold him off to a slimy CEO who's keen on exploiting him in various late-Nineties-feeling schemes, such as a Real World-like reality show and as the lead character in a first-person immersion video game. Surfer, Dude looks quite lovely: Cinematographer Elliot Davis (who also shot the tangentially related – but vastly superior – Lords of Dogtown) ably works a sun-dappled Seventies surf aesthetic, though that sophistication jars with the overall crudeness of the production. The film has several seemingly endless shots of bare breasts at a pool party that might have made sense late night on Skinemax or in a Porky's film – and, really, one wishes Surfer, Dude had the same silly joie de vivre of an Eighties comedy and not this ponderous and unfunny soul-speak about surf. It simply doesn't transmit the exhilaration of the sport or the lifestyle; in fact, watching an addled Addington, his brain a terrain of scorched earth, exhale "duuuuuuude" as he's ridden by a girl right off a Hawaiian Tropic bottle, I couldn't think of a less appealing advert for the way of the surf. 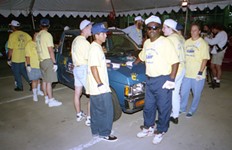 Hands on a Hard Body
Unpretentious insight into the nature of human aspiration can be found in Bindler's documentary about the yearly contest in which Jack Long Nissan of Longview, Texas, gives a new hard body pickup to whomever can keep his or her hands on it the longest.