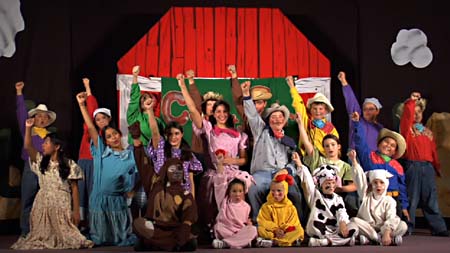 For most reasonable people, attempting to get a group of elementary school kids to produce an hourlong musical in only six days is a prescription for catastrophe. How could it not be, with all those lines to memorize, melodies to learn, sets to build, choreography to forget, faces to wash, shoes to tie, and Ritalin pills to consume? But to the drama teachers at the Missoula Children’s Theatre, introducing children to the joys of musical theatre in under a week is something to be celebrated rather than avoided. This is because they are crazy. Every year the theatre sends dozens of teachers (aspiring actors all) to small towns and big cities all over the country, the idea being that in light of the nationwide decline in school funding for performing-arts programs, an entire generation of Americans is growing up without the benefits – be they creative, social, or psychological – of working together in a group to create something artistic. The Little Red Truck, a documentary bursting with good intentions, follows a few of these teachers to learn exactly how in the world one manages to corral children onto a stage, much less turn them into budding Liza Minnellis and Mandy Patinkins. I suppose it would take a heart of stone to come down too hard on a movie about little kids finding happiness and confidence in artistic expression – especially when you consider that some of them have overcome gang violence, parental indifference, and even blindness to take part – but that doesn’t change the fact that The Little Red Truck has no business being anywhere near a movie theatre. Its behind-the-scenes stories of stage fright, missed cues, and perpetual positive reinforcement may play at bake sales or on the Disney Channel, but this is kids stuff all the way: incident without drama, controversy, art, or any of the other things that make a movie watchable. Fact is, only parents should have to sit through children’s theatre productions. That, after all, is the price they pay for getting to experience the wonder of child-rearing. For the rest of us, sitting through the making of The Frog Prince is like seeing how sausage you would never think about eating gets made.