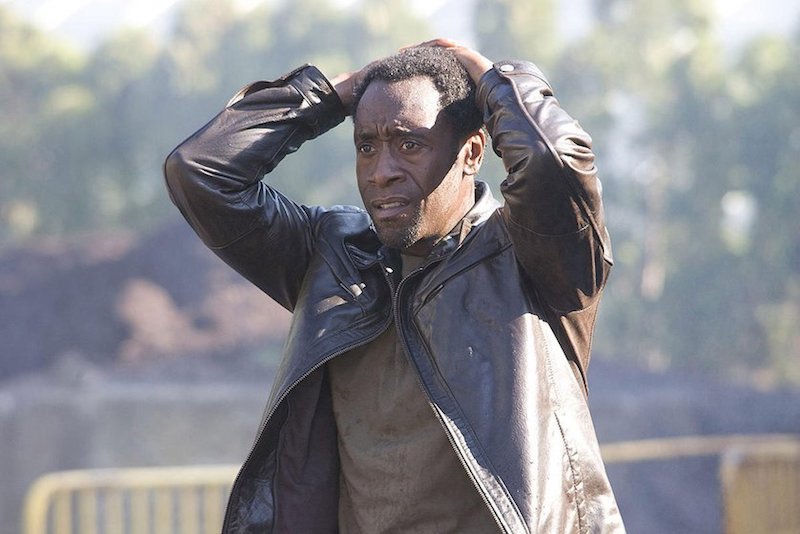 If you’re looking for a few hours of mindless, uncomplicated, air-conditioned escapism to get you through a hot late-summer’s evening, I’d recommend you look some place other than Traitor. After all, this is a movie in which Islamic terrorists engage in long discussions about the contradictions of modern warfare before they blow things up and who say things like, “Terrorism is theatre,” to one another during quiet moments. Traitor, in other words, is a rare Hollywood creature: an action picture with ambiguity, a blockbuster with more questions than answers, a shoot-’em-up thriller with a sense of moral and geopolitical ambivalence. That ambivalence is personified by the film’s protagonist, Samir Horn (Cheadle), a Sudanese national who saw his father die in a car-bomb explosion when he was a child and who’s spent the years since as an explosives expert and devout Muslim, evolving (or devolving, depending on your particular point of view) from a U.S. military operative aiding the mujahedeen against the Soviets in Afghanistan to an illegal arms dealer in Yemen to a dedicated jihadist (or terrorist, depending on your particular point of view) blowing up embassies in Europe and executing attacks on U.S. soil. Hot on his trail – Horn’s own private inspector Javert – is FBI agent Roy Clayton (Pearce), who’s smart enough to recognize the inconsistencies and hypocrisies of American foreign policy but practical enough not to let them get in the way of the hunt. I suspect there will be Americans out there who will bristle at Traitor’s tolerant trips into the hearts and minds of those on the other side of the global war on terror. But there is also probably a fair number of liberals who will object to the film’s suggestion that there just may be times (such as when news breaks that 40 Muslim radicals with student visas are living in the United States and planning a coordinated attack) when worshiping at the altar of civil liberties may not be the smartest thing a country could do. Equal parts political thriller, personal tragedy, and social commentary, Traitor is the most fun you may ever have watching all your worst fears play out before your eyes. It’s also an act of political courage, a commercial movie willing to expose the self-delusion at the heart of all ideological warfare while acknowledging both the possibility that American imperialism isn’t the worst thing the world has ever experienced and the still-revolutionary notion that maybe, possibly, Islamic jihadists may have actual reasons for what they do beyond a fanatical hatred of freedom, ice cream, and cable television.