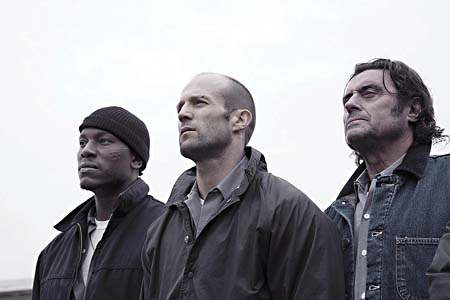 The best thing I can say about this otherwise unsalvageable heap of busted heads and blasted gaskets is this: David Carradine does more real acting in the opening two minutes – using only his voice! – than anyone else in the entire picture, and that includes all those hot-modded, supercharged, nitrous-oxide-fueled hell rides. Carradine, as fans of the original Death Race 2000 (produced by Roger Corman and directed by Paul Bartel in 1975) already know, played the masked driver Frankenstein, a racer in a two-lane-blacktop version of the equally nihilistic Rollerball (which came out the same year). In that original, futuristic NASCAR types road-rallied cross-country, picking up points by mowing down pedestrians. Corman's film arrived in theatres just two years after the United States suddenly found itself at the mercy of Middle-East oligarchs (as we are now) and deep in the process of extricating itself from a tremendously unpopular war (as we are now), and the bitter, blacker-than-black gallows humor that informed Death Race 2000 is, if anything, more relevant than ever. The advent of reality television and pay-per-view spectacle, presciently hinted at in the Corman version (legendary Los Angeles deejay "The Real" Don Steele provided histrionic running commentary throughout, via his "eye in the sky" chopper) is now the dominant media force (alongside the Internet). In its day, Death Race 2000 was a trenchantly subversive – and very American – film. This new Death Race is equally revelatory, although what it reveals is not a simmering sense of societal outrage but the exact opposite. More to the point, it also shows widely loathed director/writer Anderson to be an even worse filmmaker than his résumé suggests (most recently, he helmed the excreable AVP: Alien vs. Predator). Anderson takes the bare-bones concept of cars and drivers engaged in state-sanctioned slaughter and reduces it to dull, gladiatorial combat safely taking place behind the privatized penitentiary walls of Terminal Island, while being streamed live via the Internet to the huddled, presumably brain-dead masses. Framed for the murder of his wife by the evil prison warden (Allen), former racing pro Jensen Ames (Statham, who must never be allowed to forge an alliance with Vin Diesel lest they create a race of buff, balding, growly übermenschen) is coerced into donning the mask of the recently deceased Frankenstein, thus giving the bloodthirsty home audience more of the same old blood-and-circus. Chaos ensues, but none of it is interesting or even gearhead cool. Adding insult to vehicular homicide is Anderson's dead-awful eye for action sequences; this film has more aggressively disorienting swoops and zooms than a pigeon on acid, but it's not nearly as fascinating. Anderson has neutered the original film's outrageously transgressive macadam mayhem and completely stripped the story of its pointedly political social satire, making this Death Race one of the most boring drags of all time.