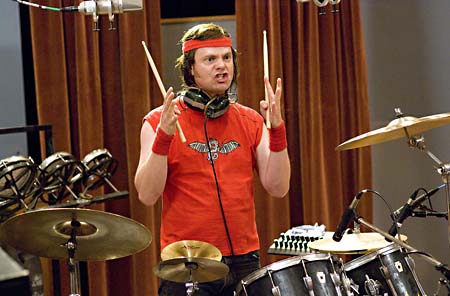 The Rocker, a minor entry in the "old rockers freaking out young rockers" subgenre, will go down in history as the first Jack Black film to exist independently of the manic star himself. That's not so much a knock on Rainn Wilson's performance here as it is a testament to the enduring popularity of films featuring overweight, middle-age Peter Pan syndromers anxiously fending off intimations of mortality via semi-anti-social antics, which ultimately coalesce into unlikely but plot-specific life lessons. Wilson (from American TV's The Office) mines a particular strand of comic DNA that continues to replicate many years after such archetypal man-children as John Belushi and Chris Farley howled their last. The whole lot of them (Adam Sandler included) owe a massive debt to Jason Robards' proto-Pan characterization of NYC eccentric Murray Burns in Fred Coe's 1965 film version of Herb Gardner's play A Thousand Clowns. (Seriously. Go rent it, and then tell me I'm wrong.) Clearly, wacky infantilism continues to play in Peoria, and pay in cash. If the premise of The Rocker (which is more succinctly summed up in the lyrics to Journey's "Don't Stop Believin'" and Iron Maiden's "Die With Your Boots On" than I'll manage here) mirrors School of Rock a tad too closely, it's only because the tropes are so hoary. Wilson plays Robert "Fish" Fishman, an enthusiastic, hard-partying ex-drummer embittered by his unceremonious firing from his former hair-metal band 20 years earlier. Currently leading a life of oppressive banality in Squaresville, USA – he day-jobs at a call center and bunks in his sister's (Lynch) attic – Fish embarks on a second grab for the brass codpiece when his nephew's pseudo-emo outfit loses its own drummer. This allows him the space to finally rock out with his cock out (literally, at one point) and pass the rockin' torch to Generation Later, Dude. An aging rocker teaches his youthful charges how to bring the noise? Will Arnett in full-on metal regalia? What's not to love? There's not that much, actually, but serendipitously there's little to hate here, either. Wilson is buoyed by a sporadically witty script, and while there are no surprises whatsoever in the story, his goofy, puppylike charm renders what could have been a disaster merely an unfortunate event, on par with spilling your bong because you're already too stoned to hold it. 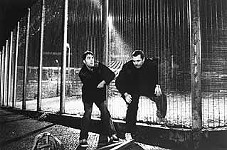 Lucky Break
Described as a “comedy about a prison escape with a musical twist,” this British film tells the story of crooks whose criminal ambitions exceed their ...