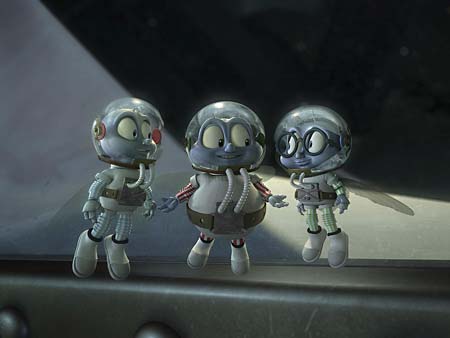 Fly Me to the Moon

If you can buy the fact that Canadian horror auteur David Cronenberg and composer Howard Shore recently unveiled a full-fledged operatic version of their 1986 film, The Fly – in Paris, no less – then chances are you'll be able to figure out this very peculiar, very 3-D, but not very exciting or even all that humorous animated offering from Belgian-born director Stassen. It is, on the face of it, a simple little parable of spirited can-do-ism, in which a trio of young houseflies (voiced by Gagnon, Bolden, and Gore) semiaccidentally tags along with astronauts Neil Armstrong, Michael Collins, and Buzz Aldrin as Apollo 11 slips the reach of gravity (but not, surprisingly, Raid) and shoots moonward. Lurking beneath that main story, though, is a number of subplots only slightly less fancifully trippy, including a pair of bumbling Soviet house-spies sent to Cape Canaveral to sabotage the mission, an elderly fly (Lloyd) and his unrequited love for his long-lost Soviet paramour, and a downright bizarre recurring gag/theme about how bad it is to be overweight. Strange as it is, Fly Me to the Moon boasts superb 3-D effects (debuting feature director Stassen made his name making lots of 3-D nature and entertainment shorts) and gobs of colorful animation, but anyone over the age of 8 is likely to be bored into madness by the lightweight puns that pass for real humor – WALL-E this ain't – and the film's overall "eh" quotient. Adding to the weirdness is a tacked-on, live-action appearance from the real Aldrin, who reassures kids and terrified X-Files fans that there weren't, in fact, any houseflies on board Apollo 11, and therefore any concerns about a giant, gamma-irradiated Jeff Goldblum-type are not to be entertained. Or something to that effect.

The Wild Life
An animated spin on Robinson Crusoe

Fly Me to the Moon, Ben Stassen