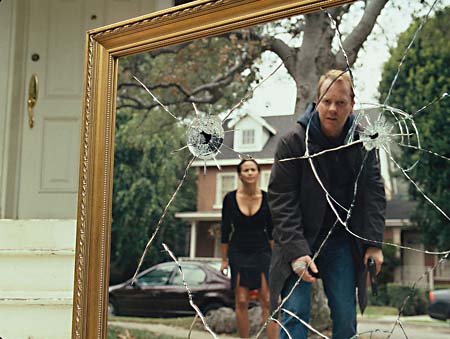 Aja is carving out a steady career in Hollywood as a reliable generator of horror movies that don't bow completely to the supremacy of the modern torture-porn ethos. After the international attention he received with 2003's Haute Tension, Aja was quickly adopted by Hollywood and wrote and directed the original remake of Wes Craven's The Hills Have Eyes, co-wrote the parking-garage creeper P2, and is now at work on another horror update, Piranha 3-D. Mirrors is an American remake of the South Korean film Into the Mirror, and we can only hope that something was lost in translation. Although the prosthetics and special effects (by KNB EFX and others) look pretty good (in other words, believably yucky), the story is ridiculous and wholly unbelievable. Something bad is trapped in the mirrors of the burned-out hulk of a department store where former detective Ben Carson (Sutherland) works as a night security guard. The mirrors start reflecting back wretched images of himself and cause him to have horrifically realistic hallucinations. Then the effect carries over to reflecting pools of water, shiny doorknobs, and the rearview mirror in Ben's car. The inexplicable force soon attacks Ben's sister (Smart) in a grisly fashion while she's naked in the tub and messes with Ben's estranged wife (Patton) and kids (Boyce and Gluck). Ultimately, there's little explanation offered regarding what the evil in the mirror actually is or the ways in which it selects its victims, making for an unsatisfying tale. An effective sound design enhances several of the film's sudden frights, and Sutherland, who appears in almost every scene, is a predictably solid presence. The moment when Ben wields his gun to remove the nun (Peil) who may hold the answer to the deadly mirror nonsense from her cloisters may just be worth the price of admission, however. Otherwise, our No. 1 freaky man in the mirror remains Michael Jackson. 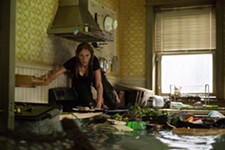 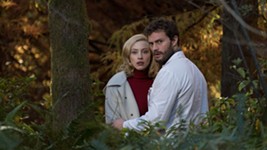