Instead of entering the jungle to find the heart of darkness, Stiller (the director, co-star, and co-writer of Tropic Thunder) goes in to take aim at the Achilles' heel of Hollywood: its utter pomposity and self-importance. Stiller’s barbs have not been this sharply pointed since his early-Nineties TV show, which parodied the industry and its various filmed products. Here, borrowing tropes and images from movies such as Platoon and Apocalypse Now, Stiller’s subject is war movies and overblown action films – but also so much more. Other targets are the actors – the pampered, self-deluded, overindulged, and overly Method – and the studio chiefs and flacks who, like megalomaniacal Geppettos, pull the strings and make their wards dance to a tune only they can hear. In the annals of movies about making movies, Tropic Thunder will have topical currency and garner laughs long after the end credits roll. Yet the laughs are often repetitive and come in unsteady spurts, which, along with some action sequences that don’t know when to stop, makes Tropic Thunder seem at times too much of a good thing. Excess can reduce the pricelessness of some of the jokes, just as it can sully the output of Hollywood. Despite the abundance of spent shells, you’ll that Tropic Thunder’s aim is true. The characters are all exquisite personifications: Stiller as Tugg Speedman, the fading action star who’s making one more bid for respectability with this Vietnam war film after his previous attempt, Simple Jack, fell flat with his turn as the mentally challenged titular character; Black as Jeff Portnoy, the coke-crazed, blond-headed comic star of the flatulent Fatties franchise (think Klumps with no gas shortage); and Downey Jr. as Australian actor Kirk Lazarus, a five-time Oscar winner who’s so Method that he undergoes skin repigmentation in order to play a black man in this movie (think Fred Williamson). Also in their outfit is rap star Alpa Chino (Jackson), who’s seeking to broaden his recognition and additionally serves as a foil to Lazarus’ faux black man, and Kevin Sandusky (Baruchel), a rookie who is just delighted to have this gig. McBride is perfect as the mulleted explosives expert, as is Nolte as the grizzled vet who wrote the memoir on which the movie they’re making is based. Coogan is hilarious as the hapless director of the film, a project that’s reported in the media to be one month behind schedule after just five days of shooting. One of the only false notes is Cruise’s much-heralded appearance as the fat, hirsute, take-no-prisoners studio chief Les Grossman, a little of which goes a long way and winds up being more self-indulgent than satirical. (Yet Cruise’s portrayal is no more anti-Semitic than the Simple Jack plot point is a disparagement of mental disability, as vocal protest groups would have us believe.) That clap of Tropic Thunder you hear in the distance is the audience applauding with real comic relief. 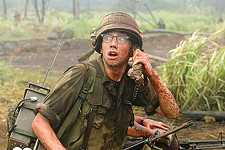