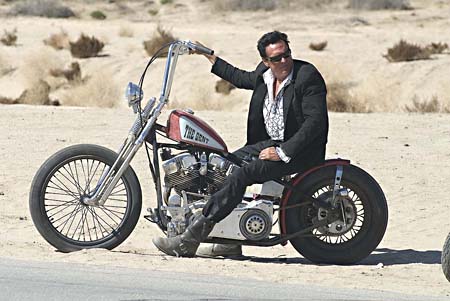 The line between homage and parody is blurry enough at the best of times in our post-Pulp Fiction world, but Hell Ride – a grindhousey biker flick executive-produced by Quentin Tarantino and starring Madsen's ongoing impersonation of a hung-over Nick Nolte on a good-hair day – pretty much fucks the distinction over. Should we be chuckling at Bishop-the-screenwriter's genuine gift for beautiful bullshit, as in the scene where Bishop-the-actor trades ever-escalating and seedily incendiary euphemisms with a perpetually horny cyclista? Or is he, you know, being serious? It's impossible to tell one way or the other, and it happens often enough that you get the urge to say to hell with the whole ride, mystical peyote journeys, naked Suicide Girl wannabes, and crazed displays of overly art-directed violence. But you don't say it because of all of the above and less. It's like watching a valentine from Tarantino's bestest friend in the whole world go directly from heart to heart, and while it references everything from the classic American International Pictures biker outings to Mad Max and beyond, this convoluted, overly snazzy-looking tale of bad blood between worse people is only as interesting as Madsen's squint 'n' gravel countenance. (The former Mr. Blonde plays a character nicknamed "the Gent," which gives you some idea of the company he keeps.) Genuine iconoclast Hopper, looking like ill-kept saddlery, appears briefly and gets his ropers pissed on, as does Carradine, Tarantino's ex-Bill. Despite the brevity of their roles, the pair of them outshines everything in sight, including Madsen's reptile grin. The story is a shambles, incoherent throughout, veined with tirelessly wearying flashbacks, hallucinations, and just plain old lousy storytelling. It's a fiasco, really, but who knows – it might be a blast on mushrooms. This being Austin, go find out, and report back if you're so inclined. Me, I've got a new DVD of The Wild Angels to dive into.