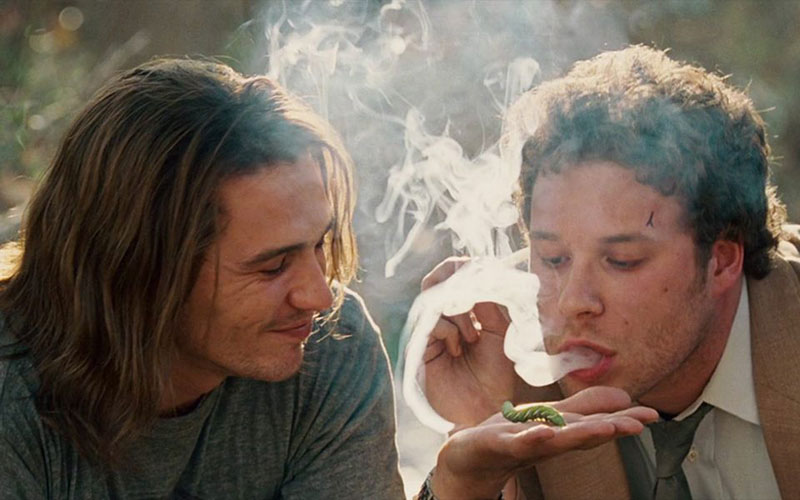 Rounding the third act of this stoner action-comedy, there's a big laugh that comes from a small moment of art reflecting life reflecting art. A low-level pot dealer named Red (played by the terrific character actor McBride) psychs himself up for a modern-day OK Corral by cocking his firearm and sing-songing "Thug Life." He's play-acting at being a toughie, and so too are the many and varied talents at work here in this affectionate bid at the buddy pics of the Seventies and Eighties. Rogen (who co-wrote the script with partner Evan Goldberg) plays a process server named Dale Denton, who accidentally witnesses a murder and must go on the lam with his dealer, the sweet, half-lidded Saul (Franco). (The title refers to a particular strain of weed that Saul sells Dale, weed so good it smells like "God's vagina.") The action follows the pair almost exclusively, and Rogen and Franco – who previously worked together on Freaks and Geeks and are part of überproducer Judd Apatow's rotating roster – have a comfortable, freewheeling chemistry, like Richard Pryor and Gene Wilder's. Strip away the guys with guns chasing after them, and what you have are two loners stumbling onto a soulmate – or another hilarious, heartfelt ode to fraternal love in the same vein as Rogen and Goldberg's breakout from last summer, Superbad. In the morally uncomplicated landscape of the buddy picture, it's "bros before hos!" (as Red serially, nonsensically cries out), and that idea might as well be hand-stenciled and nailed crooked to the door of the Apatow clubhouse. That exclusivity rankles less in Pineapple Express, partly because we are tossed a delicious little bone by way of Perez's pert, dirty cop and partly because the mostly male cast is so good, right down the line, from the bad guys to the bit parts and, most especially, the unlikely leads. Franco, who too often gravitates toward wet-blanket roles, is a revelation as kindhearted idiot savant Saul, and the smirking, plush-toy pliable Rogen (Knocked Up) defies action-hero conventions to achieve what he may count, in his twilight years, as his single greatest moment on film: a slo-mo free fall onto the back of a drug lord that rock-star splits between beauty and badassedness (it's blood-free, too, which cannot be said about the film's hyperviolent, shoot ’em up climax). The arthouse darling director Green (All the Real Girls) plays against type, too, and in the process has crafted a film that is at once elegant and sublimely silly. That's no mean feat: When was the last time you paused during a Will Ferrell comedy to admire a sun-dappled, wooded idyll or how it recalled some long-ago romantic idea about AM radio? 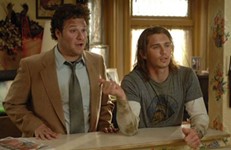