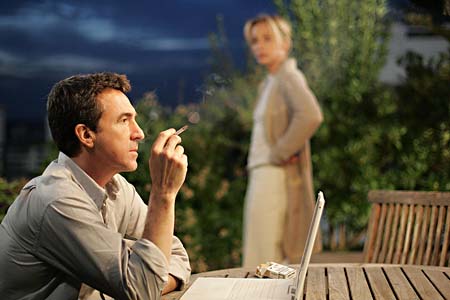 Tell No One, French director Canet's excellent adaptation of Harlan Coben's bestselling novel, has everything a great personal-paranoia/persecution movie needs: a citizen-hero who refuses to capitulate to unseen and malevolent powers that are, for reasons unknown, out to destroy him; love, desperation, and erotic obsession as motivating forces; crooked cops; back-alley gangsters; random violence; not-so-random torture; at least one top-notch foot chase; and a soundtrack that features ballads by both Otis Redding and Jeff Buckley. The film’s hero is pediatrician Alexandre Beck (Cluzet), whose wife and childhood sweetheart, Margot (Croze), vanishes one night after wandering into the woods by the couple’s cherished lake and is presumed murdered. Flash forward eight years, and Alex is still in mourning, balancing the demands of his workaday life with those of the past he constantly revisits in his head, visits punctuated by drunken reveries and flashes from his wife’s funeral. Then, on the eighth anniversary of Margot’s disappearance, Alex receives an anonymous video e-mail message that suggests everything he knows about that horrible night may be wrong. From the moment that video appears, Tell No One is a great ball of unrelenting energy barreling through the streets of Paris, following the once-resigned but now-energized Alex on his rabid quest to unravel the truth about his wife, a quest that, like so many of the best conspiracy-fueled films (particularly Howard Hawks’ brilliant The Big Sleep), is more fascinating the more convoluted, and eventually impenetrable, it becomes. By the time Alex starts stumbling into answers in the film’s last act, chances are you won’t even really care to know what they are, because the thrill of Tell No One isn’t in the knowing (as proven by the overlong expository conversation that brings the film to a tidy, if uninspiring, conclusion); it’s in the not knowing. The thrill is in the wondering: wondering where those inner-city gangsters appeared from all of a sudden; wondering who that sinister woman in the sleeveless shirt is; wondering if Alex is really all he claims to be; wondering if his wife is – or was. The thrill is in watching a defeated man pull himself out of his half-dead haze of confusion, desperation, self-loathing, and murky memory and into the rejuvenating life of action, no matter how confusing, desperate, loathsome, and murky that life, and that action, may be. 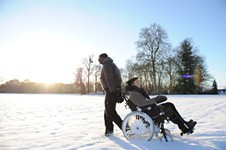 The Intouchables
The unlikely friendship that forms between a wealthy, white quadriplegic and a streetwise, black ne'er-do-well who becomes his live-in companion is the subject of this French film.