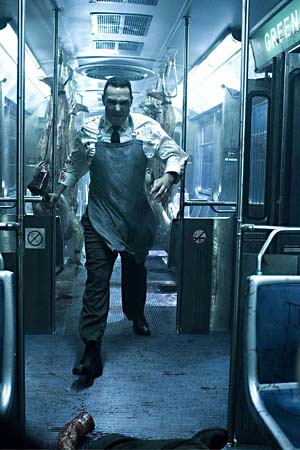 The Midnight Meat Train does not stop here. Last week, on Aug. 1, distributor Lionsgate dumped the horror movie, which is based on a Clive Barker short story, in little more than 100 theatres nationwide – and to rub salt in the wound, those theatres were all dollar houses or second-run venues. Such treatment – especially from the company whose coffers in recent years have been lined with the profits of the vicious Saw franchise, as well as numerous other low-budget horror outings – might be construed as an indication of the picture’s audience-worthiness. But nothing could be further from the truth. (The best guess is that the move is merely a sloppy portent of Lionsgate’s future plans to move away from the hard-R horror product that’s provided its recent bread and butter.) The Midnight Meat Train, at least until it crumbles in the last act, is a well-done horror movie that harks back to the slasher films of the Eighties. It features a decent cast and stylish direction by Japanese import Kitamura, who here tones down the frenetic disorientation of his best-known film on these shores, Versus. Cooper plays Leon, a photographer who, spurred by the advice of an important art dealer (Shields, in an atypically angular performance), delves deeper into the dark underbelly of the city (in other words, the subway system) in order to find grittier truths. He stumbles into the mystery of the murders committed nightly by a solitary butcher (Jones) on the subway. No one else in the city is aware of these crimes because no bodies are ever found. A whack to the head from an enormous meat-tenderizing mallet usually knocks the victim to the floor (maybe also popping out an eyeball or two), and then the butcher methodically slices, dices, exsanguinates, and otherwise removes all traces of the victim's corporeal existence. Jones, in a near-wordless performance, is effectively frightening as the butchering golem, and the film's action in the subway and its slaughterhouse set-piece are striking. However, the script by Jeff Buhler does little to fill out the characters or explain the butcher's backstory, and the quick explanation at the end really doesn't suffice. The Midnight Meat Train may not be grade-A prime, but it ain't chopped liver either. Versus
Gorehounds watching this low-budget Japanese splatterfest will think they’ve died (in a, no doubt, spectacularly bloody way) and gone to heaven, so breathtaking are the ...